Key Events This Week: Is Europe About To Snap

Key Events This Week: Is Europe About To Snap

With the Fed now in their FOMC blackout period (which means any 100bps “leaks” will again have to go through the WSJ) and a lighter US week for data (ex-housing), Jim Reid notes that Q2 US earnings and all things European will be at the forefront of market attention this week with the highlight being the ECB’s likely first rate hike since 2011 on Thursday, while gas flows from Russia after maintenance on the Nord Stream pipeline ends the same day will also be a big focus with the EU expected to detail energy contingency plans the day before. We’ll also get a decision from the BoJ on Thursday too. Global preliminary July PMIs for the US, Japan and key European economies will come out on Friday.

Digging into some of these themes in more detail:

the ECB meeting on Thursday will likely deliver a +25bps hike, the first rate increase since 2011. DB’s European economists retain their 2% terminal rate forecast but the hiking cycle is expected to be split. The first phase has hikes of +25bp, +50bp, +50bp and +25bp in July, September, October and December. By end-2022, the deposit rate will be 1%, helping to balance inflation and growth risks before the anticipated recession forces a pause. The second phase in H1 2024 is now expected to have four +25bp hikes and push rates into moderately above neutral territory (spoiler alert: none of this will happen as the ECB will be forced to resume easing once the European recession hits in a few months).

The ECB’s decision comes as Europe is grappling with significant concerns about the energy supply, a euro that has reached parity against the dollar for the first time since 2002, and inflation at an all-time high of 8.6%. If that’s not enough, it also comes alongside a recent widening in peripheral sovereign bond spreads and an Italian government possibly on the brink of collapse. We should know more on Wednesday when Draghi addresses lawmakers in Rome, however things are escalating quickly. The Five Star Movement (the second largest in the coalition) effectively abstained in a confidence motion in the Senate, triggering the current crisis. This weekend the party have met and don’t seem to be dialing down the rhetoric with leader Conte blaming Draghi for the impasse. Meanwhile the centre-right block are saying the coalition pact has been broken and that they won’t now rule in a coalition with Five Star. Probabilities of a snap election are certainly going up.

With this unfolding, the details of the anti-fragmentation tool will be highly sought after at the ECB meeting. The ECB will also release its Euro area bank lending survey tomorrow and the Survey of Professional Forecasters on Friday.

Another event that will keep investors on edge that day is the end of the Nord Stream pipeline’s scheduled maintenance period. Fears that Russia will keep the taps closed have roiled markets in recent weeks and the EU is expected to detail contingency plans on Wednesday. Although the NS1 maintenance period ends on Thursday, it’s possible that there will be ambiguity on supply for a while. 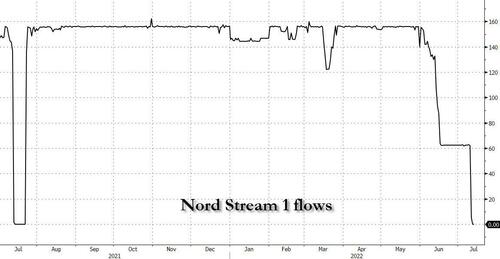 Whatever Russia’s plans for supply through the autumn and winter, we may not fully see it in the next few days and weeks. Part of that might be politics and part of it may be operational as the turbine repair may take a while to be fully integrated, or at least that could be the claim. So we may get a few clues from Friday but it is unlikely we’ll know all the answers.

Also on Thursday, the next policy decision from the BoJ will be due.While DB expects no change in the current monetary stance and forward guidance on policy rates, the BoJ’s Outlook Report is expected to show a downgrade in its growth forecast for FY2022 and an increase in its inflation forecast. The national CPI print will be due the next day and our economist expects core inflation (ex. fresh food) to climb to 2.2% YoY (+2.1% in May) and core-core inflation (ex. fresh food and energy) to 0.9% (+0.8% in May). Small fry in a western context but relatively strong for Japan.

Back to the data and US housing market indicators will be in focus this week, after the June CPI report showed the fastest monthly gains since 1986 for primary rents and 1990 for owners’ equivalent rent. In terms of data, we have July’s NAHB Housing Market Index (today), followed by June housing starts, building permits (tomorrow) and existing home sales (Wednesday). 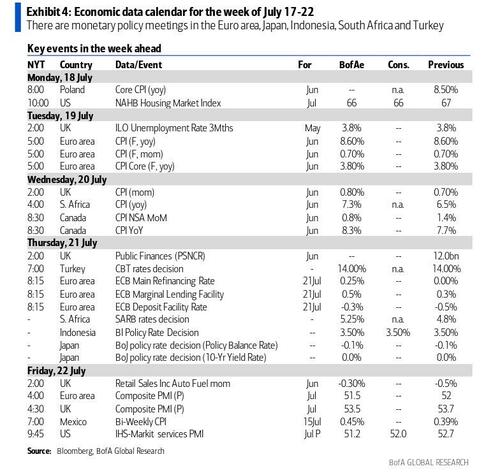 In European data, the UK will be in focus with June CPI, RPI, PPI and May’s house price index due on Wednesday, preceded by labour market data tomorrow. Also released tomorrow will be July’s consumer confidence for the Eurozone, followed by a similar gauge and June retail sales for the UK on Friday.

In terms of earnings, after key US banks started reporting last week, we will get more insight into the state of the economy and consumer spending from Goldman Sachs, Bank of America (today) and American Express (Friday). Amid a mixed-bag performance for commodities in recent weeks, results from Halliburton (tomorrow), Baker Hughes (Wednesday), Schlumberger and NextEra (Friday) will be in focus. Earnings of consumer-oriented companies will be highly anticipated as well, including Johnson & Johnson (tomorrow), United Airlines, Tesla (Wednesday) and American Airlines (Thursday). In tech, key reporting corporates will include IBM (today), Netflix (tomorrow), ASML (Wednesday), SAP (Thursday) and Twitter (Friday). Other corporate earnings reports will feature Lockheed Martin (tomorrow), AT&T, Blackstone (Thursday) and Verizon (Friday). 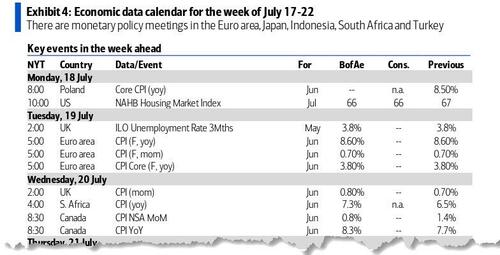 Here is a day-by-day calendar of events:

Finally focusing on just the US, Goldman writes that the key economic data release this week is the Philadelphia Fed manufacturing index on Thursday. There are no scheduled speaking engagements from Fed officials this week, reflecting the FOMC blackout period.