Heading into today’s IBM earnings which traditionally launch the tech segment of earnings season, we made a prediction: the company’s non-GAAP EPS would beat lowballed consensus estimates by 1 or 2 cents, the gap between GAAP and non-GAAP would be so wide, Arnold’s hummer would fit right through, giving IBM the now traditional benefit of hundreds of millions in “one-time”, “non-recurring” addbacks, and the company would also use an artificially low tax rate.

So what happened? Well, take a wild guess:

Yup, just as every other quarter, IBM predictably goalseeked its adjusted EPS to come just a fraction above (hence 1 or 2 cents) consensus, an outcome that is now so conventional one does not need Watson’s artificial intelligence to anticipate it with 100% accuracy. 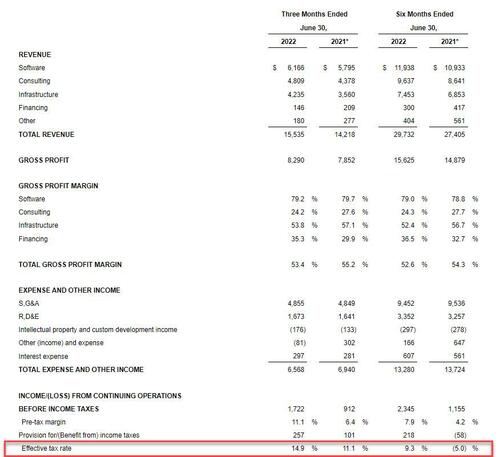 With that in mind, let’s dig into the breakdown of the company results.

Of note, hybrid-cloud revenue jumped 18% to $5.9 billion in the quarter, which was good news (at least until one looks at the margin compression associated with this market share gain).

IBM also announced that in Q2, it generated net cash from operating activities of $1.3 billion (or $2.6 billion excluding IBM Financing receivables). At the same time, the company returned $1.5 billion to shareholders in dividends in the second quarter. In other words, once again the company’s cash from ops was not enough to meet dividend obligations.

The silver lining: IBM ended the second quarter with $7.8 billion of cash on hand (which includes marketable securities), up $0.2 billion from year-end 2021. Debt, including IBM Financing debt of $12.3 billion, totaled $50.3 billion, down $1.4 billion since the end of 2021, so at least IBM’s recent decision to pay down debt continues apace.

So far so good. What wasn’t quite so good is that sales at IBM’s Red Hat – its cloud division – increased just 12%, the slowest rate since it was acquired in 2019. The division has been a key part of Krishna’s turn-around strategy, and typically posted growth closer to 20%. Last week, IBM named Matt Hicks as the new head of as the segment, promising little change in strategy. IBM was quick to blame the strong dollar saying that the growth dip is due to currency and there’s no material slowdown in the unit; of course since there is little on the horizon to hint that the dollar is about to collapse, it’s unclear why one should dismiss the adverse FX impact.

What was even worse is that IBM hinted at the brewing economic storm clouds, by saying that it continues to expect constant currency revenue growth at the high end of its mid-single digit model. However, as some have pointed out, IBM’s constant currency revenue growth was 11% in the 1Q, and 16% in the 2Q, which implies a bloodbath for the second half…

$IBM, as usual, is as clear as mud. “Constant currency” revenue growth for all of FY 2022 is still expected to be at “the high end of its mid-single digit model.” But constant currency revenue growth was 11% in the 1Q, and 16% in the 2Q. What does that imply for the 2H…? pic.twitter.com/CFe5wCfLC0

Worst of all, however, is that IBM lowered its full year free cash flow estimate to $10 billion from an earlier range of $10 billion to $10.5 billion.

The reduced cash flow forecast is due to the strength of the dollar and the loss of IBM’s highly-profitable Russia business, rather than a broader business slowdown, Chief Financial Officer Jim Kavanaugh said in an interview. “Our demand remains solid” he said, but judging by the stocks reaction after hours, the market does not believe it, and with IBM stock sliding sharply after hours to just $131, it is back to where it first was in July 1999… 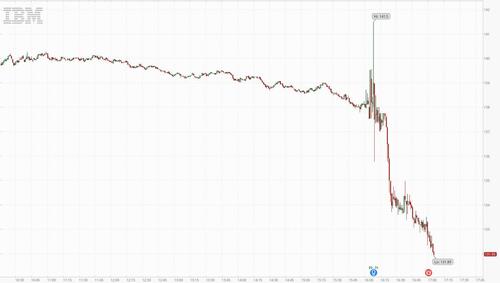 … which is ironic because as Bloomberg writes, “IBM has been a rare pocket of stability in the tech market meltdown, gaining 3.3% this year compared with a 31% loss for the iShares Expanded Tech Sector ETF.”

Better make that “had been”