What Is Adam Schiff Hiding?

What Is Adam Schiff Hiding?

Authored by Julie Kelly via AmGreatness.com,

Schiff tucked an amendment into the National Defense Authorization Act that would prohibit any evidence collected in violation of the Posse Comitatus Act from being used in investigations. Why? 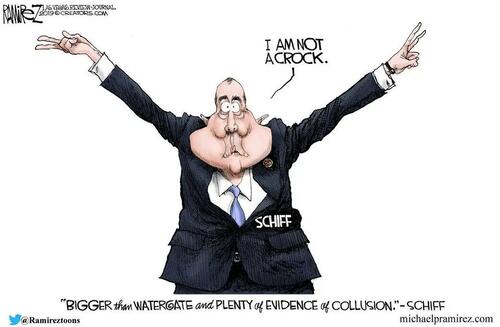 The then-acting attorney general—Rosen was appointed on December 24, 2020 to replace departing Attorney General William Barr—had assembled a team of elite and highly skilled government agents at Quantico, a nexus point between the FBI and U.S. military, the weekend before Congress met to certify the results of the 2020 presidential election. At the same time he was rejecting President Donald Trump’s last-minute appeals to investigate election fraud, Rosen was managing a hush-hush operation in advance of planned rallies and protests in Washington on January 6.

“Rosen made a unilateral decision to take the preparatory steps to deploy Justice Department and so-called ‘national’ forces,” Newsweek reporter William M. Arkin disclosed in a bombshell report earlier this year. “There was no formal request from the U.S. Capitol Police, the Secret Service, or the Metropolitan Police Department—in fact, no external request from any agency. The leadership in Justice and the FBI anticipated the worst and decided to act independently, the special operations forces lurking behind the scenes.”

Those assets, according to Arkin, included “commandos” with shoot-to-kill authority. And among them were members of the military.

“The presence of these extraordinary forces under the control of the Attorney General—and mostly operating under contingency plans that Congress and the U.S. Capitol Police were not privy to—added an additional layer of highly armed responders,” Arkin writes. “The role that the military played in this highly classified operation is still unknown, though FBI sources tell Newsweek that military operators seconded to the FBI, and those on alert as part of the National Mission Force, were present in the metropolitan area.”

Little else is known about Rosen’s secret mission. His testimony to the House Oversight Committee in May 2021 was just as obscure. Rosen, who publicly bragged to the January 6 select committee about his attempts to deter Team Trump from pursuing vote fraud days before the Capitol protest, said the FBI opened a multi-agency operation center, which included the Department of Defense, at FBI headquarters on January 5. “Each of these federal agencies supplied personnel to staff the [center] 24/7 beginning on January 5 and 6, and continuing for a period thereafter,” he said.

To avoid “interfering” in ongoing investigations, Rosen then declined to answer any questions from lawmakers at the time.

But if the military engaged in any civilian law enforcement activity, including surveillance or intelligence collection, before or during January 6, it would represent an egregious violation of the military’s code of conduct and federal law. Under the Posse Comitatus Act, military personnel cannot be used as local cops or investigators: “Whoever, except in cases and under circumstances expressly authorized by the Constitution or Act of Congress, willfully uses any part of the Army, the Navy, the Marine Corps, the Air Force, or the Space Force as a posse comitatus or otherwise to execute the laws shall be fined under this title or imprisoned not more than two years, or both.” (Certain exclusions, such as the president’s invocation of the Insurrection Act and any use of the National Guard, apply.)

The law is both vague and specific at the same time—which brings us to Representative Adam Schiff (D-Calif.). Irrefutably the least trustworthy member of Congress, Schiff tucked an amendment into the massive National Defense Authorization Act that would prohibit any evidence collected in violation of the Posse Comitatus Act from being used in a number of proceedings, including criminal trials and congressional investigations.

The amendment’s timing, like everything else related to the infamous Russian collusion huckster, evidence forger, and nude photo seeker (to name a few of Schiff’s special talents), is highly suspect. Why would Schiff need to outlaw evidence collected unlawfully? Why is Schiff relying on this relatively arcane statute passed during Reconstruction that is rarely, if ever, enforced?

“No one has ever been convicted of violating PCA to my knowledge,” Dr. Jeffrey Addicott, a 20-year member of the Judge Advocate General’s Corps and director of the Warrior Defense Project at St. Mary’s College, told American Greatness last week.

What is Adam Schiff, on behalf of the Biden regime and Trump foes in the U.S. military, including Chairman of the Joint Chiefs of Staff Mark Milley, trying to hide?

It is not a coincidence that Schiff introduced the amendment just a few months before a predicted Republican landslide in November, which will give control of Congress back to the GOP. House Minority Leader and presumptive Speaker of the House Kevin McCarthy is planning to conduct multiple investigations into the Biden regime next year including of the deadly and distrastrous withdrawal from Afghanistan; the Daily Caller reported this week that Republican lawmakers are “flooding the Biden administration with ‘hundreds of preservation notices’ asking that relevant documents be preserved.”

But one can easily see how Schiff’s amendment could be used as legislative cover to prevent production of any materials from Biden’s Department of Defense. After all, according to a 2018 congressional analysis of Posse Comitatus, “compliance [of the act] is ordinarily the result of military self-restraint.” So, too, is enforcement: “The act is a criminal statute under which there has been but a handful of known prosecutions,” the same report explained.

This is the sort of vehicle that Democrats know how to use and exploit for political advantage. If interpretation and enforcement is totally arbitrary, who decides? Defense Secretary Lloyd Austin? The Justice Department? Biden’s White House lawyers?

Imagine how Democrats could conceal the use of military personnel related to the events of January 6. Congressional Republicans send a request to Austin seeking all records, documents, and communications pertaining to the military’s involvement before and during the Capitol protest. Austin replies that he has determined the military—under control of President Trump at the time, no less—violated Posse Comitatus and therefore the requested materials cannot be produced under authority of the Schiff amendment.

Republicans can howl and scream but they have no legal remedy. Austin won’t investigate and Attorney General Merrick Garland won’t prosecute.

This scenario could be repeated for every Republican inquiry into Biden’s Defense Department. Does anyone really think this regime will hand over information to GOP investigators and committees without pulling every trick in the book, starting with Schiff’s amendment?

On Thursday afternoon, the House narrowly passed Schiff’s amendment by a vote of 215-213; every Republican and two Democrats voted no. (House Speaker Nancy Pelosi came to the floor to vote in a rare move.) Passage in the Senate is uncertain.

If his amendment fails to advance, Schiff nonetheless has done Republicans a tremendous favor; he’s tipped off the GOP that there’s plenty of digging to be done at the Department of Defense, where a trove of scandals awaits political sunshine.

Republicans would be wise to take his cue—and start with January 6.