Oil Prices Blamed For Inflation When The Driver Is Really Food

Oil Prices Blamed For Inflation When The Driver Is Really Food

Gas prices have been a major factor for the increase in CPI, but when prices dipped inflation remained stubbornly high.

The reason was the constant increase in the cost of food and beverages.

For stocks to really reverse the current downtrend, food and beverage prices need to drop in order for the consumer to continue to spend. 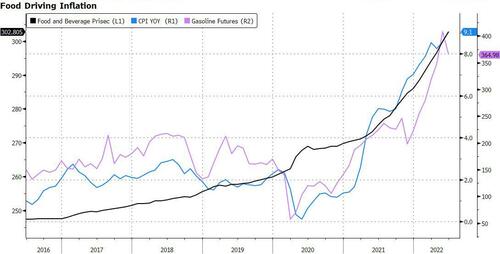 When gas prices surge many of us can try to cut back on driving to save some money but it is far more difficult to cut back on feeding one’s family regardless of price. The answer to inflation will have to come from somewhere else, instead of blaming Ukraine.

Gas prices began to rise almost a year before Russia invaded the country as did the price of food and beverages. Both began to climb in after March of 2020 when the economy was flooded with federal spending.

Fiscal policy is responsible for inflation more so than monetary policy. The Fed is fighting the Treasury’s battle and stands a good chance of messing it up.