Four Scenarios: What Happens Next In Italy’s Government Crisis

Four Scenarios: What Happens Next In Italy’s Government Crisis

By Elaine Allaby of The Local

Italy was thrown into turmoil on Thursday after the populist Five Star Movement (M5S), which had been the largest party in parliament, abstained from participating in a crucial vote in the Italian senate.

M5S’s decision to boycott the vote on a €23 billion aid bill designed to offset the soaring cost of living for Italians was seen as a fatal blow to the integrity of the coalition government.

Draghi resigned on Thursday evening, saying the “pact of trust that the government is based on has gone”. He had been appointed as a technocratic prime minister in February 2021 after a previous government collapse.

Italy’s head of state President Sergio Mattarella refused to accept the prime minister’s resignation, however, and pressed Draghi to reconsider.

Draghi will now leave on a scheduled state visit to Algeria to negotiate a gas deal, but has agreed to return to parliament on Wednesday at Mattarella’s request to see whether a resolution can be reached.

What does this all mean for Italy? At this stage things could go any number of ways; we take a look at some possible scenarios put forward by Italian media and political and financial analysts. 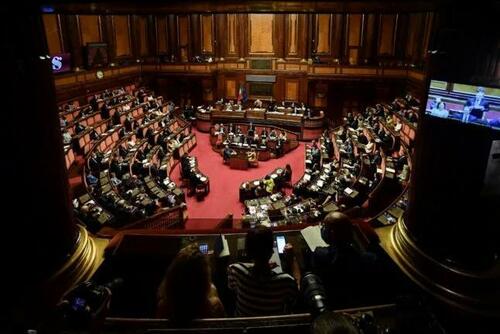 Italy was due hold a general election anyway in the first half of 2023; a snap election would bring this forward by several months.

M5S is expected to do poorly in a snap election, having haemorrhaged support since they were voted in as the largest party in 2018 – which is why some analysts have suggested M5S doesn’t actually want the government to collapse at all, but to shore up support from voters by proving its anti-establishment credentials.

In favour of a snap election is the far-right Brothers of Italy party, which performed well in local elections in June. Salvini, leader of the populist League party, has also expressed support for the idea.

That’s unsurprising given that the most probable outcome from an early election is a right wing coalition government led by Brothers of Italy, League, and Silvio Berlusconi’s Forza d’Italia.

2. Draghi reaches an agreement with M5S and things go on as before

This seems an unlikely prospect as both Draghi and M5S leader Conte have insisted on their determination not to bend to the other’s will.

The M5S boycott came after Conte presented Draghi with a nine-point list of demands, including the introduction of an Italian a minimum wage, which the prime minister rejected. Conte has accused the government of bringing about the current crisis by using “force and blackmail”.

Draghi, for his part, has simply said he won’t give in to ultimatums issued by parties in his ‘unity’ government.

Even if Draghi and M5S were to reach an agreement, the government would be fragile, and there’s nothing to say there wouldn’t be another crisis in a few weeks’ time.

In theory this is technically viable, and appears to be what Mattarella has in mind. Even without M5S, Draghi could still get the votes to form a majority in parliament.

It’s questionable whether this could actually work in the long run, however, with newspaper Corriere della Sera calling it “a possibility that hardly anyone believes in.” It would require the League to lend its support and risk alienating the Brothers of Italy, which wants an immediate election.

Draghi is reportedly possessed of the “intimate certainty” (his own words, according to Corriere) that if he does form a new government, he’ll be subjected to attacks of the same kind from other parties like the League in the following weeks and months, and the government will collapse all over again.

4. Draghi leaves and a new government is formed without him

In this scenario the favourite to become prime minister is Daniele Franco, the current finance minister who, like Draghi, has no party affiliation.

His would be another technocratic government made up mostly of the same ministers as those in the current cabinet, minus M5S leaders.

A Franco government would steer Italy through the passage of a budget law in the autumn and the possible enactment of an electoral law currently under review, and see the country through to a general election towards the start of next year.