Comparing The Cost Of Living Around The World

Comparing The Cost Of Living Around The World

The amount of money that’s needed to pay for day-to-day expenses like housing and food varies greatly from city to city. And some cities, like New York City, are known as especially expensive places to live.

So how do everyday expenses in New York City truly compare in costs to places like Beirut, Lebanon, or Bangalore, India?

This graphic by Victor Dépré (hypntic.data) uses 2022 data from Numbeo to compare the cost of living and purchasing power in 578 different cities around the world, using New York City as a benchmark for comparison. 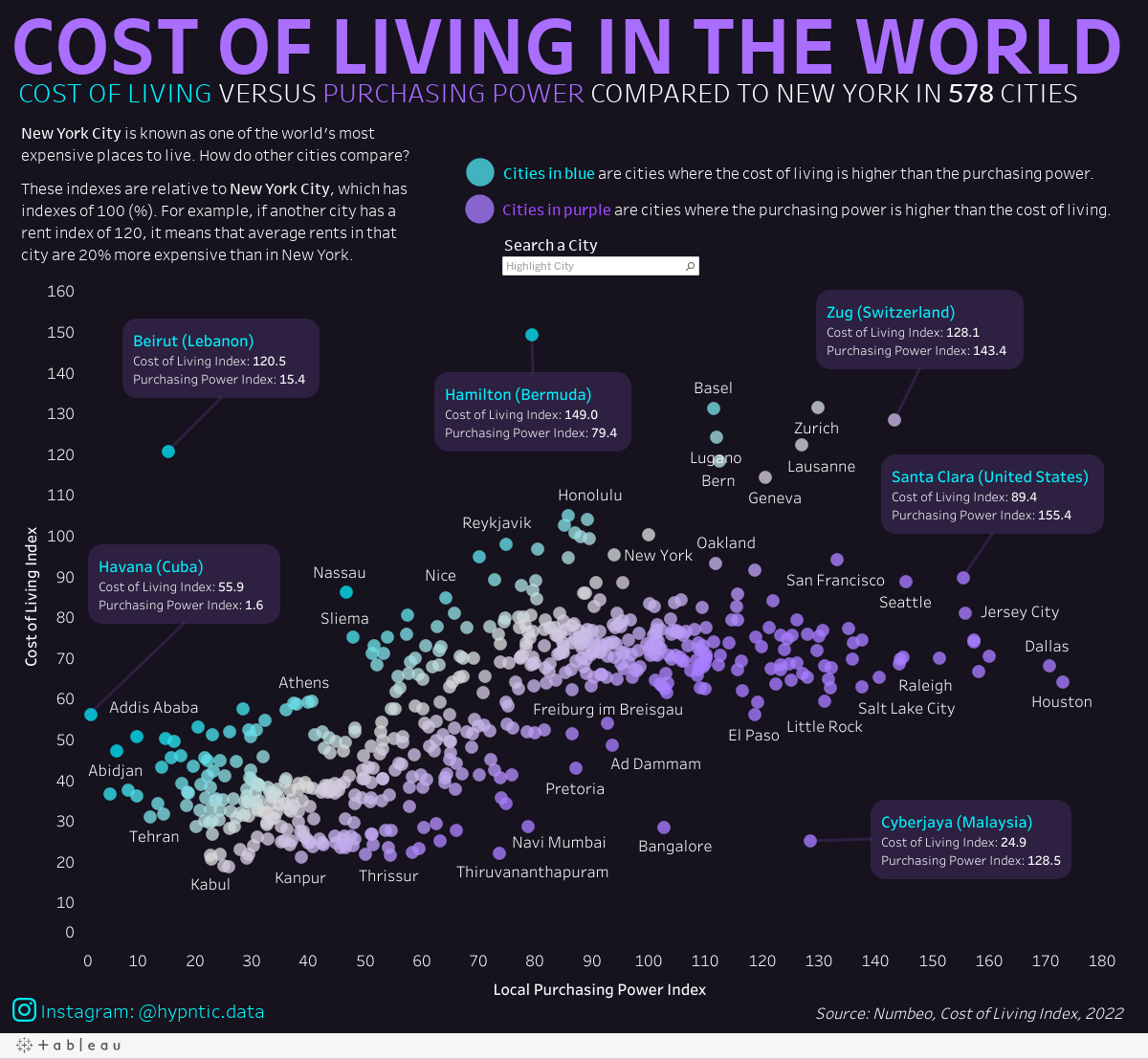 The Cost of Living Index

Though New York City is widely recognized as one of the most expensive cities in the world, as Visual Capitalist’s Carmen Ang details below, according to Numbeo – the world’s largest database of user-contributed data on cities and countries – there are a number of cities that are actually more expensive than the Big Apple.

Here’s a look at the comparative cost of living in 578 cities. For context, if a city has a cost of living index of 121, that means day-to-day expenses in it are 21% higher than New York’s, on average:

Bermuda’s capital city Hamilton ranks first on the list, with a cost of living that’s nearly 50% higher than New York’s.

Why is Hamilton so expensive? One reason is that nearly everything needs to be imported onto the tiny British archipelago—things like gas, groceries, and clothes—so it’s likely that prices in the territory are steep as a result.

Second on the list is Zurich, Switzerland, where expenses are roughly 30% higher than New York City. Food and beverages are particularly expensive in the region—according to the dataset, groceries are 58% more expensive than groceries in NYC, and restaurant prices are 55% higher.

However, it’s worth noting that while Zurich ranks high on the cost of living index, the city’s purchasing power is also strong, which we will dive into in the next section.

Purchasing power is a metric that’s used to gauge the number of goods and services someone on an average salary can buy in that specific city.

Taking a look again at Zurich, consumers in the city have about 30% more purchasing power than New York City residents on average, despite having higher costs.

In contrast, the average consumer in Hamilton, Bermuda has a relatively low purchasing power. Based on the average net salary in the city, consumers can afford about 30% less than people in New York City.

Inflation Continues to Drive Prices Up

Amidst rising inflation and increased prices for consumer goods, cost of living has become top of mind for many people around the world.

Since late 2021, the world has been experiencing a cost of living crisis, largely because of pent-up demand following the COVID-19 pandemic, coupled with supply chain issues and the Russia-Ukraine conflict.

But according to UBS Chief Economist Paul Donovan, we’ve likely seen the worst of it, and inflation is likely to decrease across the globe in the second half of the year.