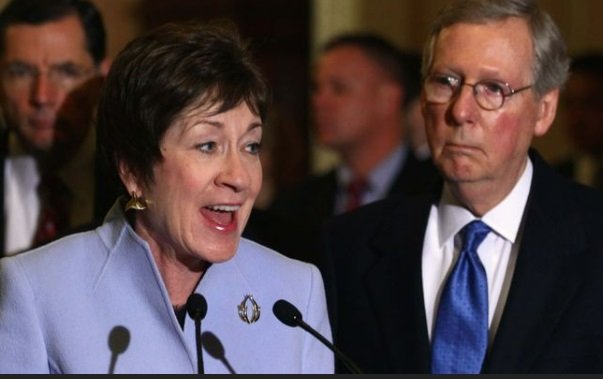 Senate RINOs who never were America first are working with Democrats and Democrat-connected non-profits to change existing election laws that will basically prevent Americans from challenging US elections.

President Trump warned about this months ago and now the corrupt actors in the US Senate are close to making it a reality.

President Trump: It’s “So Pathetic to Watch…Political Hacks, Liars, and Traitors Work…to Alter the Electoral College Act” – They Should be Investigating Pelosi and Pence Instead

The senators have agreed “on a series of provisions to reform the Electoral Count Act, a move aimed at clarifying the role of the vice president and Congress in confirming the winner of a presidential election in the wake of Jan. 6,” NBC News reported on Thursday. “The working group is finalizing legislation and expects to release text as early as next week.”

“We’re very close. We’ve got a few technical issues that we need to iron out, and I’m very hopeful that we’ll have a bill early next week — or bills,” Sen. Susan Collins (R-ME) told reporters Wednesday. “That’s one of the issues that we’re deciding: whether it’s better to introduce more than one bill or one bill.”

The far-left non-profit Protect Democracy appears to be behind this legislation which is telling:

According to the activist group Protect Democracy, reforming the Electoral Count Act would change how votes are cast for the president and vice president.

“The Electoral Count Act (ECA) governs the process of casting and counting Electoral College votes for president and vice president,” Protect Democracy notes. ” The statute sets the timeline for states to appoint presidential electors in November and for electors to cast their votes in December, and describes the process that Congress should follow when it counts the states’ electoral votes in January.”

We’ve written about Protect Democracy before:

It looks like the Senate wants to make sure that any election results that are fraudulent, if not addressed beforehand, will be certified by Congress with no opportunity to address the fraud.  If this is the case, this is not good.  When fraud is involved every possible opportunity to stop it should be built into the design of the election process.

The post Senate RINOs Working with Democrats to Basically Prevent Americans from Challenging Elections in the Future appeared first on The Gateway Pundit.