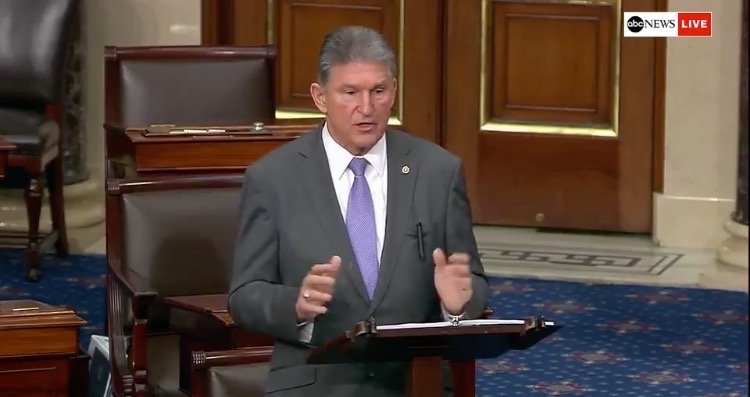 According to The Washington Post, on Thursday, Senator Joe Manchin told Chuck Schumer “unequivocally” that he would not support the climate or tax provisions of a Biden’s failing attempts to pass his famed Build Back Better bill.

Schumer reportedly tried to negotiate the climate provisions, but Manchin would not budge an inch.

Manchin told Schumer he would not support a bill this month with any provisions on energy or climate change, nor would he consider raising taxes on the wealthy or corporations.

Manchin’s call for sanity has dealt another massive blow to Biden’s legislative agenda ahead of November’s midterms.

Manchin has been at the helm of stopping Biden’s $1.75 trillion climate and economic bill, known as the Build Back Better Act.

The bill is much smaller than the bill Democrats had pushed for when Biden first took office, a larger $3.5 trillion spending plan that would have thrust the nation into even higher inflation.

Manchin’s staff told The Washington Post, “Political headlines are of no value to the millions of Americans struggling to afford groceries and gas as inflation soars to 9.1%,”

Manchin spokeswoman Sam Runyon said in a statement. “Senator Manchin believes it’s time for leaders to put political agendas aside, reevaluate and adjust to the economic realities the country faces to avoid taking steps that add fuel to the inflation fire.”

Schumer and Manchin had focused recent discussions on H.R. 5376 (117), spending as much as $500 billion, mainly on climate and energy, while raising $1 trillion in new revenues from prescription drug reform and tax increases.

But, Manchin’s decision to reject the proposed package stalls the government spending further, leaving Democrats with a struggle going into the midterms.

The post Manchin Saves America Again, Saying No To Climate Change And Tax Hikes In Biden’s Build Back Better appeared first on The Gateway Pundit.