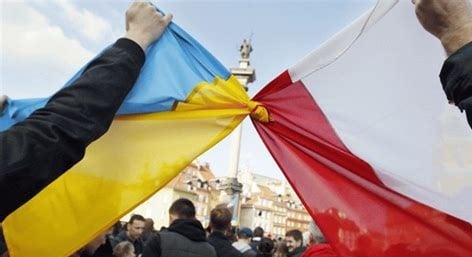 Time for a history lesson. Let us assume you are Polish and you had two relatives who died in World War II. One was murdered in the Wolyn Massacre and one was executed in the Katyn Forest. Would it make any difference if I told you that the Wolyn Massacre was carried out on the orders of Ukrainian nationalist, Stepan Bandera while the Katyn Forest slaughter was headed up by Lavrentiy Beria, who hailed from the Republic of Georgia? Would it matter to you? Who would you hate more? Ukraine or Georgia?

Now let me add some more complicating factors. More than 100,000 Polish civilians, mostly women and children, were murdered during the Wolyn Massacre by Stepan Bandera fanatics while 20,000 Polish officers, professors and lawyers were exterminated by the Georgian, Lavrentiy Beria, who also happened to be the head of the Soviet NKVD. Bandera killed the Poles because he wanted to ensure the racial purity of Ukraine. Beria executed the Polish officers and elite because he wanted to eliminate future political opposition. Which of these monsters is the worst? (Me? I hope they each are burning in Hell).

I can see how someone could argue what Bandera did was worse because it was grounded in racism and was five times worse than the body count in the Katyn Forest. But let me add some further complications.

The Soviet Union’s leader, Josef Stalin is vilified for signing a cynical pact with Adolf Hitler that divided Poland between the two tyrants–Germany got the west and the Soviet Union got the east. Did you know that Stalin is not Russian? Like his compatriot thug, Beria, Stalin was born and raised in Georgia. And did you know that Stalin, worried about security on the Soviet Union’s western border, tried to first cut a deal with the British but was rebuffed (from the Wall Street Journal):

Prof. Ian Ona Johnson omits evidence that the Soviets did attempt to establish an anti-Hitler coalition in the run up to the war. Recent scholarship confirms the numerous efforts by Joseph Stalin to reach out to Britain, and through it to other Western governments, to join in presenting a united front against Hitler. In the most important of these, Soviet Ambassador to Britain Ivan Maisky repeatedly approached the Chamberlain government about such an alliance. Loath to ally with the communists, Neville Chamberlain responded at various points by either ignoring these entreaties or slow-waking talks that could have led to a deterrent to Hitler.

When these overtures failed, the Soviets turned to Germany to seek an alternative that would protect them and, not coincidentally, reward them with expanded territory. In no way does this excuse or lessen the evil of the Molotov-Ribbentrop Pact, nor does it deny the legitimacy of Prof. Johnson’s larger point, but one must acknowledge the historical record.

The Poles have other reasons to hate the Soviets. When the Polish Army rose up in Warsaw against the Nazis, they hoped that the approaching Soviet Army would come to their rescue:

The Warsaw Uprising (Polish: powstanie warszawskie; German: Warschauer Aufstand) was a major World War II operation by the Polish underground resistance to liberate Warsaw from German occupation. It occurred in the summer of 1944, and it was led by the Polish resistance Home Army (Polish: Armia Krajowa). The uprising was timed to coincide with the retreat of the German forces from Poland ahead of the Soviet advance.[15] While approaching the eastern suburbs of the city, the Red Army temporarily halted combat operations, enabling the Germans to regroup and defeat the Polish resistance and to destroy the city in retaliation

When Poland fell under Soviet control at the end of the war, Stalin intensified a campaign of terror:

During the most oppressive phase of the Stalinist period (1948–1953), terror was justified in Poland as necessary to eliminate reactionary subversion. Many thousands of perceived opponents of the regime were arbitrarily tried and large numbers were executed.

Now here is a question–why don’t the Poles hate the Republic of Georgia? The two guys responsible for making the decision that led to the deaths of tens of thousands of Poles–Josef Stalin and Lavrentiy Beria–were Georgians, not Russians.

One more fun fact. It was the Russian, Mikhail Gorbachev, who reversed years of Soviet denials about the murders in Katyn Forest and issued an official apology for the horrific action of the Soviet Union.

Polish anger at Soviet leadership and Soviet communism for their years of loss and suffering is quite understandable and justified.  But Polish anger at Ukraine would be justified as well but this is not happening.

My purpose in writing this is to remind you that history is nuanced and complex. With the current war in Ukraine we are witnessing Poland’s willingness to not only ignore the ethnic genocide carried out by Ukraine’s hero, Stepan Bandera, but enthusiastically support Ukrainian nationalists who hate Russia and venerate Bandera. History is rife with tales of strange bed fellows getting cozy with one another. How long will the current love affair between Poland and Ukraine last? I don’t know, but the next few months are likely to reveal whether this is a marriage of convenience or a lasting relationship.

The post Despite a History of Ukraine Related Massacres in Poland – Poland Maintains Support for Ukraine appeared first on The Gateway Pundit.