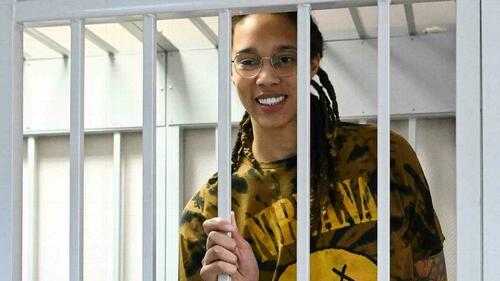 The trial of American citizen and WNBA star Brittney Griner continued in Russian court on Friday, with her lawyers presenting for the first time evidence they say show she was prescribed medical cannabis in the US which was crucial to treat a chronic injury.

Her defense team submitted the prescription to the court, arguing she had “inadvertently” entered the Moscow airport with the banned substance where she was arrested on Feb.17. “The defense today provided written evidence, including character materials, medical documents and tax returns,” Griner’s lawyer Maria Blagovolina later told the press.

“Among the medical documents is a doctor’s note for the substance that Brittney Griner inadvertently left among her belongings when crossing the border,” Blagovolina added.

Importantly, Griner earlier this month during the opening of the case entered a guilty plea to violating Russian drug laws. But the US government months ago deemed her a “wrongfully detained” citizen abroad.

In the beginning, she was even accused by authorities of drug “smuggling”. She had told the court last week, “I was in a rush packing and the cartridges accidentally ended up in my bags.”

Accidental or not, she faces up to 10 years in prison for violating strict national anti-drug laws. Additionally, marijuana is illegal in Russia for both recreational and medical purposes, thus her defense team’s pressing the “prescription” angle is unlikely to go very far with the court.

Despite Griner’s legal saga receiving by far the most international attention, also given President Biden weeks ago phoned her family, pledging the US is doing everything it can to secure her freedom, there was another similar case which just wrapped up a month ago which didn’t go well for the American citizen at center of it:

A former employee of the U.S. Embassy in Moscow has been handed a 14-year prison term in Russia for illegal drug trafficking after he was caught entering the country with medical marijuana he says was prescribed to him after back surgery.

A court in the town of Khimki near Moscow said on June 17 that U.S. citizen Marc Fogel, who works as a teacher at the Anglo-American School in the Russian capital, was sentenced the day before.

Fogel had been detained in August of last year when he flew from New York to Moscow. He too tried the ‘medical marijuana’ defense, but to no avail – still getting a harsh, lengthy sentence which his supporters say was politically motivated amid shattered US-Russia relations.

https://t.co/nYAL3MF0NK
The arrest of an American in Russia last August resembles the case of Brittney Griner.
Marc Fogel, a teacher and former U.S. Embassy staff member, was convicted on charges of drug smuggling in Russia. He was sentenced to 14 years in prison.#news#Worl… pic.twitter.com/vUCooe0cxe

According to further prior US media coverage of his trial and sentencing:

Fogel says he had medical papers explicitly showing the marijuana was prescribed by doctors and that it was solely for medical use.

Fogel was quoted at the time as saying that he had not known that medical marijuana was illegal in Russia. His lawyers said then that Russian authorities had found 17 grams of marijuana in his possession.

Russian prosecutors had presented Fogel as at the center of a large-scale drug smuggling operation, which he vehemently denies.

The 60-year old former diplomat turned school teacher had reportedly been found with merely 17 grams, which is just over half an ounce, of cannabis when border agents searched his luggage upon arrival at Moscow’s Sheremetyevo airport. A court statement subsequently said: “U.S. citizen M.H. Fogel was sentenced to 14 years in a maximum-security prison.”

US officials have viewed the harsh sentencing of Americans as a ploy by Moscow to eventually use them as pawns for either political leverage in negotiations and/or for hostage swaps.