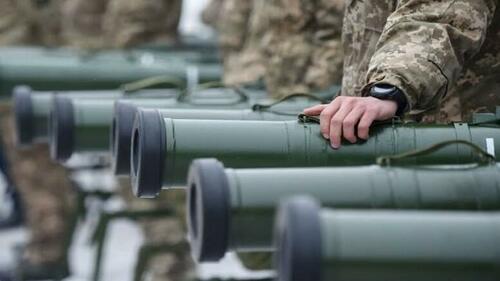 In April the EU’s top law enforcement agency Europol warned that smuggling of weapons from the Ukrainian battlefield to the black market outside the warzone had likely already begun. For five months the West, especially the US and UK, has been pumping more and more weapons into the conflict. There’s also the concern that “criminal gangs” will continue using them long after the war ends.

US defense officials months ago also admitted they had “almost zero” ability to track weapons they hand out to Ukrainian forces. The Pentagon inspector General also recently admitted this reality on the ground. Most recently, according to fresh reporting in the Financial Times this week, multiple NATO countries are in talks with Ukraine’s government to establish a monitoring mechanism to better oversee weapons shipments and their locations once in the hands of local forces.

The report cites unnamed Western officials who are talking about the need for “detailed inventory lists” of all military gear sent into the country. This begs the question: why don’t such lists complete with serial numbers exist to begin with?

Underscoring the haphazard and chaotic nature of how arms and gear are delivered across the border, the FT details based on a source:

“All these weapons land in southern Poland, get shipped to the border and then are just divided up into vehicles to cross: trucks, vans, sometimes private cars,” said one of the western officials. “And from that moment we go blank on their location and we have no idea where they go, where they are used or even if they stay in the country.”

Some international publications have already noted parallels to Syria, given it was long ago documented that US coalition weapons were found in ISIS and al Qaeda hands in ample supply after the West’s covert program to arm the anti-Assad insurgency.

However, some US officials are still still claiming there’s close monitoring and oversight of these weapons, while still admitting the possibility they could fall into the “wrong hands”:

The potential for US weapons sent to Ukraine to fall into the wrong hands is “among a host of considerations” given the “challenging situation” on the ground in the country, said Bonnie Denise Jenkins, US under secretary for arms control and international security, on Tuesday.

“The US very seriously takes our responsibility to protect American origin defence technologies and prevent their diversion or illicit proliferation,” Jenkins told reporters in Brussels, adding that the US was in “continued contact” with Kyiv on the issue. “We are confident in the Ukrainian government’s commitment to appropriately safeguard and account for US [weapons],” Jenkins added.

But it still looks like a risk that Washington is perfectly willing to take, despite that among the arsenal being continuously shipped are Stinger anti-aircraft missiles as well as Javelin anti-tank missiles. Both of these weapons in particular would constitute a huge threat to civilian transport, aviation included, if terrorists got a hold of them.

You know those billions of your money US is sending to Raytheon and Lockheed “for Ukraine”? The arms are being sold by Ukrainian smugglers onto the black market.

Nobody knows exactly where these dangerous weapons are, but I’m sure we’ll have a new war at some point to stop them. https://t.co/JadjL8EEfz

Officials in Kiev have meanwhile downplayed the growing alarm over weapons smuggling as but Russian propaganda. For example Ukraine’s defense minister, Yuriy Sak, recently stated that “Any movement of weaponry either into Ukraine or out of Ukraine – when such movement is required for repairs when necessary – is very closely monitored and supervised both by Ukraine and our international partners.” He added that the claims “could be part of Russia’s information war to discourage international partners from providing Ukraine with weaponry that is necessary for our victory.”