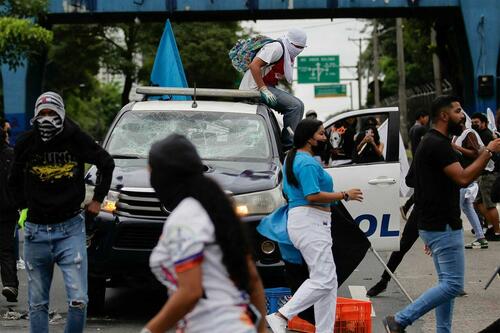 In yet another example of the destabilizing effects of inflation, economically-disruptive protests and strikes in Panama have entered a second week, despite extraordinary moves by President Laurentino Cortizo.

What began with a strike by teachers fed up with a higher cost of commuting has mushroomed into a wider movement with more aggressive tactics, including blockades of Panamanian ports and major highways. Panama’s Maritime Chamber said the highway roadblocks have caused “financial losses in the millions for the maritime and logistics industries.”

#PANAMÁ is on its 4th day of protests by their people against their government as well. Time to take back our governments from the Globalist elites and #WEFpuppets We the People! pic.twitter.com/UKoVb1cX9w

Construction workers announced they would impose a 24-hour strike on Wednesday. Panama Canal unions voiced their solidarity, but are prohibited by law from striking themselves. Students, and impoverished indigenous people from the western part of country, have also joined the protests.

In a national address on Monday, Cortizo announced he would extend a freeze on gas prices to all consumers, fixing the price at $3.95 a gallon, which is 24% lower than the end-of-June price. (The Panamanian economy uses the U.S. dollar.) As originally instituted in May, the fuel-price freeze only applied to public transportation. The price relief is to be enabled by $150 million in subsidies over the next three months.

Blaming inflation on the pandemic and the war in Ukraine, Cortizo also promised to pursue price caps on 10 basic goods, including pasta, beef loin, vegetable oil and canned sardines. That move will likely prove to be a short-sighted and destructive act of desperation: History teaches us that price caps inevitably lead to product shortages…and bare shelves cause more unrest than high prices.

🇵🇦 #Panama goes out to protest high fuel prices and corruption from the province of Veraguas, the Inter-American highway is closed. pic.twitter.com/noynoKXkKf

Protest leaders say even those moves aren’t enough. Several unions have said the mayhem will continue until the price of gas is slashed by another 25%, to below $3.00 a gallon, along with an economy-wide reduction of prices.

With unrest growing and bringing what some observers say is the largest wave of protests in the country in 30 years, the Panamanian government agreed to talks with protestors that will take place on Thursday afternoon, moderated by Archbishop Jose Domingo Ulloa.

Saul Mendez, secretary-general of Suntracs, Panama’s principal construction union, told International Business Times that it’s imperative that the government freeze or cut the cost of electricity, medicine, fuel and food—and that it needed to bring about a general increase in wages too.

Hundreds protest in Panama against rising fuel prices and corruption : Demonstrations against fuel price hikes and corruption have been going on for more than two weeks in Panama, in one of the largest waves of protests in the country in the last three decades. pic.twitter.com/uTyZwgwTkw

On Tuesday, the government announced that public institutions would start cutting payrolls by 10% and reduce other spending as well. While fiscally responsible and perhaps addressing concerns about government corruption, sending public workers into unemployment will broaden the ranks of those who are displeased with the Panamanian government. Union leaders have already condemned the move as certain to cause “more hunger.”

While there’s no reports of deaths or injuries so far, tires have been set ablaze and some property damage has been observed. Students in Panama City seized and smashed a police car.

On Monday, buses carrying migrants from the Columbian border to the Costa Rican border were damaged when they attempted to bypass a roadblock on the Pan-American Highway. The government pleaded with protestors to allow the buses the freedom to move the migrants northward and beyond Panama.

“The price of gasoline is overwhelming those of us who have to travel to teach classes in our schools,” Ilbis Rujano, a public school teacher and inflation-protestor told Associated Press. “Besides that, the cost of food rose, which is a hit on the poorest families who have to send their children to school. This can’t be tolerated.”

The general strike against high prices and corruption is intensifying in Panama for the tenth day of mobilization despite the President’s announcement on Monday of lower fuel and food prices.#Panama #Protest #FuelPrices #FuelCrisis pic.twitter.com/poRDQrSXKP

#Veraguas #Panama🇵🇦- Demonstrators who have attempted a road blockade while flares are ignited, clash with National Police units on the Pan-American Highway around the #Atalaya entrance in #Santiago, amid ongoing protests pic.twitter.com/2DAujuQJEa