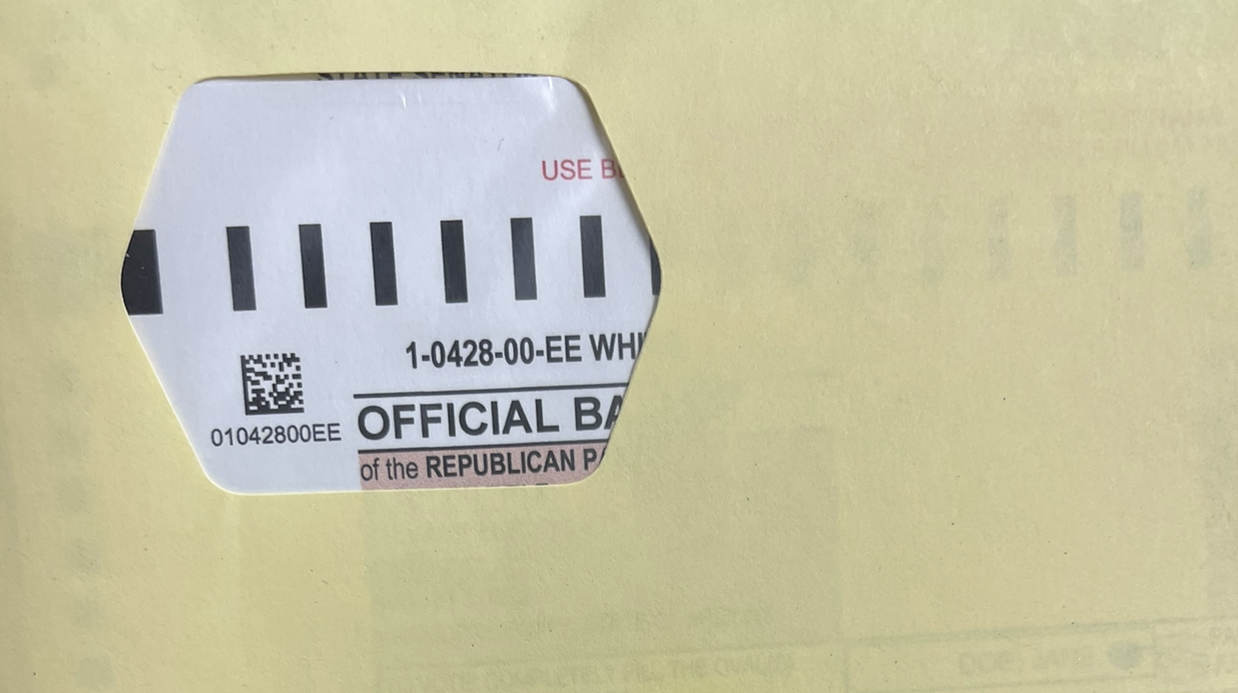 Maricopa County’s early mail-in ballots are sparking concerns among voters whose party affiliation is clearly displayed in the corner of their envelope.

The Gateway Pundit reported that early voting started in Arizona, and the democrats are doing everything in their power to steal another election from MAGA Republicans. The Primary Election will officially take place on August 2nd.

Maricopa County’s mail-in ballots are a clear and direct violation of SB1002, which was signed into law by the Governor on March 18, 2021. Arizona Statutes have been updated to read, “The officer charged by law with the duty of preparing ballots at any election shall: Ensure that the ballot return envelopes are of a type that does not reveal the voter’s selections OR POLITICAL PARTY AFFILIATION and that is tamper evident when properly sealed.”

This creates a serious election integrity concern for bad actors who seek to abuse Republican ballots.

The Gateway Pundit reported extensively on the law violations that occurred in Maricopa County’s 2020 Election that was rigged and stolen from President Trump. The Maricopa County full forensic audit and “2000 Mules” investigations discovered hundreds of thousands of potentially fraudulent ballots, missing ballots, and ballots with no chain of custody.

Liz Harris and Captain Seth Keshel, two Patriots who led a canvass of Maricopa County homes, calculated that over 173,000 votes were LOST. 34.23% of canvassed voters who were recorded with no vote said they had voted.

The Gateway Pundit obtained a copy of a concerned Maricopa County voter’s email to the Arizona Attorney General’s Election Integrity Unit. Elected officials and AZGOP officials are CC’d in the email.

Please investigate the circumstances of the names of political parties being openly shown, visible, and identifiable as printed on official live public election ballots for the 2022 Primary Election, the election itself now live, throughout the jurisdiction of Maricopa County, Arizona. . . . . . . . . . .
For your further reference, please see the attached photos below, one series showing the placement of a ballot as one may be randomly situated within the vote-by-mail envelope as received in a mailbox, and the other series showing the range of how a ballot may be situated from one extreme to the other, providing insight as to all possibilities in between, be it more remotely, by accidental happenstance, or more directly, by intentional manipulation, of these live ballots.
These vote-by-mail ballots are in a most controversial state of being, especially in the context of what may be represented to be some form of so-called “chain of custody.”
. . . . . . . . . .
On Ballot Chain of Custody and Rightful Jurisdiction Over the Administration of Elections
How is it constitutional for the United States Postal Service (USPS), a federal government agency, controversial in and of itself as it is, administered and run by unelected federal government officials and their federal government employee subordinates, utilizing federal government equipment, hardware, firmware, and software, subject to what sort of certification and auditing, how is it constitutional for the USPS to be involved so directly and so closely in our official county and state public government elections?
The USPS, and Runbeck Election Services for that matter, commit massive and widespread chain of custody violations by processing and handling live public election ballots throughout the 27 days of so-called “early voting.”
As for jurisdiction, the states and counties, herein Arizona and Maricopa County, are in first position, charged to control the administration of their elections, including, most especially, ballot chain of custody.
. . . . . . . . . . .
14th Amendment Equal Protection Violations
Furthermore, I am a registered voter who votes in-person on Election Day. My 14th Amendment rights (see Equal Protection Clause) are being violated when I’m required to vote one way, on one day, within one polling place’s opening and closing time, as per official guidelines and restrictions, but others who “vote” by mail get to vote in a multitude of other—different—ways, days, times, and related circumstances.
Add to that, I’m required to physically provide Voter ID in-person, live, person-to-person, elector to election official, in order to obtain an official live public election ballot, every single time, but someone who votes by mail is never required to physically provide Voter ID in-person, live, person-to-person, elector to election official, in order to obtain their ballot.
Also, where, exactly, in words, is it established, anywhere in the Arizona Revised Statutes (A.R.S.), obtaining a ballot by remotely providing a signature on a ballot affidavit envelope throughout “early voting,” USPS and Runbeck breaking the chain of custody of the live ballot along the way, now violating the privacy and secrecy of the live ballot by showing political party identification on live ballots to anyone and everyone involved in the long and circuitous journey the ballot takes from beginning to end and all points in between, is somehow equal to a registered voter obtaining a ballot by providing in-person Voter ID at a polling place on Election Day only between the opening and closing of the polls (see A.R.S. 16-579)?
Once the ballot is cast in-person at a polling place on Election Day, the only thing involved between the voter and his or her vote is the mere tabulation of his or her ballot, subject to official confirmation (which should be subject to split political party human confirmation and recordation) before the ballots are physically moved from the polling place to the Maricopa County Elections Department, a county government agency run by unelected Maricopa County Elections Directors, who openly admitted in the presentation of the 2020 Maricopa County Election canvass to the Maricopa County Board of Supervisors that Maricopa County government proudly turns over partial control of the administration of our public elections to Dominion Voting Systems, as in unelected Dominion Voting Systems’ personnel using Dominion equipment (maybe manufactured elsewhere and stamped “Dominion”?), using Dominion hardware, firmware, and software. Word is some Dominion personnel are former Maricopa County Elections Department employees. Word is also that some of those who used to be Maricopa County Elections Department employees are somehow permitted to administer Maricopa County public elections as Dominion employees contracted by the Maricopa County Elections Department, Recorder’s Office, and Board of Supervisors, one way or the other.
. . . . . . . . . .
Please investigate and advise on all the above.
Thank you.
Respectfully submitted,
Registered Voter
Maricopa County, Arizona
U.S.A.

Why should Arizona think that Republican ballots are safe this election?