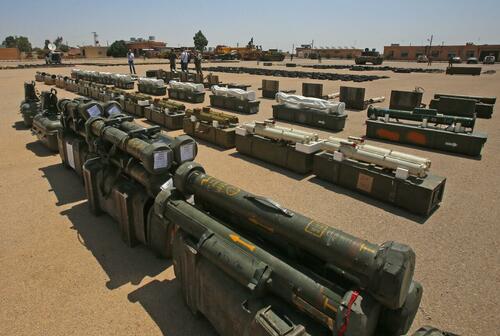 The European Union is set to again boost its funding for military arms shipments to Ukraine, expected to be agreed upon by member states at a meeting of foreign ministers on Monday.

They are expected to set aside 500 million euros ($500 million) more in military aid to Kiev, Bloomberg reports, at a moment Russian forces continue unleashing constant artillery strikes on Ukrainian positions in the Donbas.

“That would bring the total arms financing to 2.5 billion euros,” Bloomberg writes. “The bloc in recent months has agreed to several rounds of arms financing for Ukraine under the so-called European Peace Facility, which reimburses governments for military deliveries to Ukraine.”

The Zelensky government has this week ramped up its calls for “faster” delivery of heavier and more advanced weapons if its forces hope to answer the pace of Russian artillery fire and seeming endless supply of ammunition.

But the Pentagon, and likely some European states like France and Germany, are growing worried about the fast depleting levels of their own vital stockpiles.

In addition, Pentagon officials have expressed concerns about hurting U.S. combat readiness if the war continues for months or longer. After two decades of mostly supporting counterterrorism missions, America’s defense industry largely stopped making the kinds of weapons Ukraine will need to survive a long war of attrition. The United States has authorized $54 billion in military, economic and humanitarian aid for Ukraine and has sent more than $7 billion in weapons drawn from existing Pentagon stockpiles.

This mention of “months” before US stockpiles start feeling squeezed should be put up against the “years” that some top defense officials have offered as their estimates of how long the Ukraine war is likely to grind on.

Édouard Guillaud, former chief of France’s defense staff at a recent conference: “France has already donated one-third of its long-range guns to Ukraine.”

Additionally, as we detailed earlier some Western officials are beginning to wake up to reality foreign-supplied weapons are likely leaving the battlefield, sold on the black market and ending up in the hands of criminal groups or possibly even terrorists.

Amid the growing concern, EU and NATO governments are in talks with Kiev about setting up a joint monitoring apparatus and tightening procedures and logistics surrounding delivery and tracking of weapons.