According to Goldman trader John Flood, this morning’s CPI print coming with a much higher than expected 9+ handle will keep institutional investors frozen and the bank expects very little offense to be played over the next few weeks. Furthermore, as discussed earlier, 75bps was thought of as a lock for July but now this: Raphael Bostic signaled the Fed could hike by 100 bps after June’s inflation report. “Everything is in play,” the Atlanta branch chief said. Asked if that included by raising rates by that amount, he replied, “it would mean everything.” Just an hour earlier Nomura made a 100bps rate hike its base case.

As Flood notes, there were “plenty of incomings on the “sharp reversal higher” in the mkt post CPI.” Here is his explanation why stocks ramped:

“We flagged that the level of pre-trading (shorting) into this print was quite noteworthy. Institutional positioning remains VERY light…L/Os running record high cash levels and HFs gross/nets in bottom percentiles on 1, 3 and 5 yr look backs. Does it makes sense for mkt to move higher after a 9.1% print and BOC hiking by 100bps…of course not…but that was max pain trade today and this market seeks max pain. Difficult to truly analyze intraday moves with liquidity stuck at the lowest levels we have seen in years (S&P futures top of book liquidity near $3mm again).

At the end of day, Flood observes, “inflation remains incredibly sticky and earnings growth estimates are coming down. Be very patient buying the dips and use squeezes as opportunities to lighten up. We in for a long summer. Below chart is HF current gross and nets.”

And speaking of declining earnings growth estimates, tomorrow we get the first bank earnings (preview here) and as Goldman notes, there is plenty of angst regarding cautious commentary on calls which will lead to further sell side downgrades and PT cuts. To underscore just how much concern there is heading into earnings season, Flood notes that he got this nugget which sums up earnings sentiment nicely: “Sell-side analysts are scrambling to get ahead of Q2 earnings; over the last 5 days they’ve downgraded more than 500 names (on a net basis).  Since the Financial Crisis, there’s only been 4 other weeks when that many names have been downgraded that quickly.“

For a slightly more balanced take we go to the first Q2 Earnings Tracker from BofA’s Savita Subramanian (full note available to pro subscribers), in which she previews the starting earnings season as follows: “expect a ‘meet’ at best and a weak guide.” Below are the key highlights: 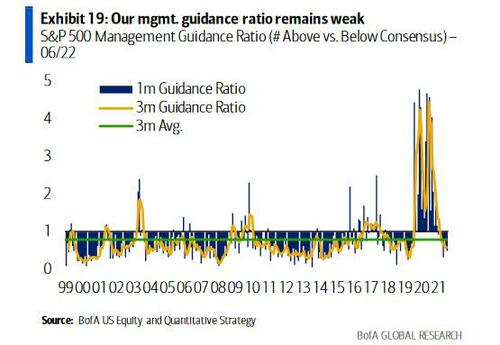 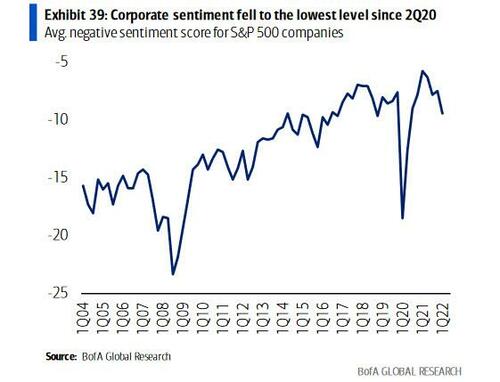 …. slowing signs in both consumption and industrial activity plus negative economic surprises. 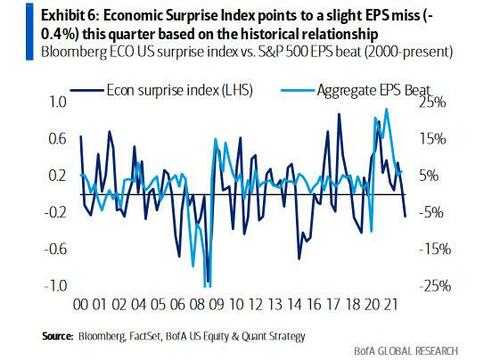 But channel checks in Industrials and Software are healthy, and early reporters have beat EPS by a median of 3% – typically early reporters don’t fare as well ahead of a disappointing quarter. Expectations for 2Q have come down 1% versus the average cut of 4% in the last three months, but excluding Energy the cut has been a deeper 5%. 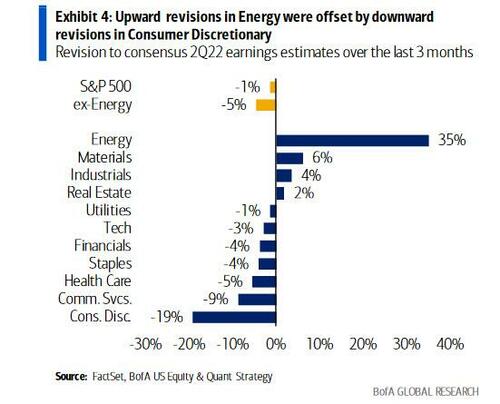 Investors who view Tech as defensive, citing stable earnings during the past two recessions, may be disappointed in the next one. Consensus earnings for the Nasdaq 100 have lagged S&P 500 earnings for nine months running. Since the ‘80s, Tech has seen more frequent sales declines than the S&P 500…

… but has been buoyed by cost benefits from globalization and (more recently) a pull forward in demand. But mega-cap Tech companies could now face the biggest challenges amid de-globalization.

Capex: should be slowing (pro-cyclical) but now a must-do

But capex may be more necessary than in prior cycles: supply chain challenges revealed by the pandemic, emerging geopolitical risks and ambitious greenhouse gas (GHG) emission reduction pledges have conspired to push mentions of near-shoring capex to record highs. 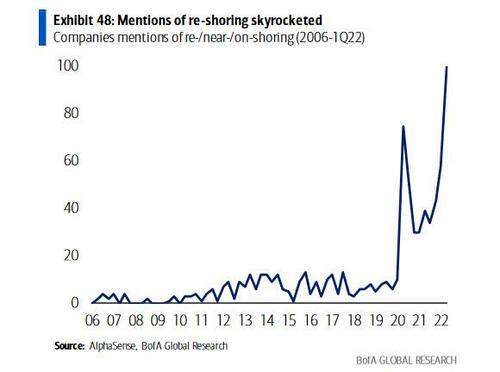 Tight labor incentivizes companies to spend to automate; and capital stock is old – we haven’t had a refurbishment capex cycle for decades. At a point when earnings are slowing, mandatory capex could represent an unwelcome draw on free cash: buy capex takers, not spenders.