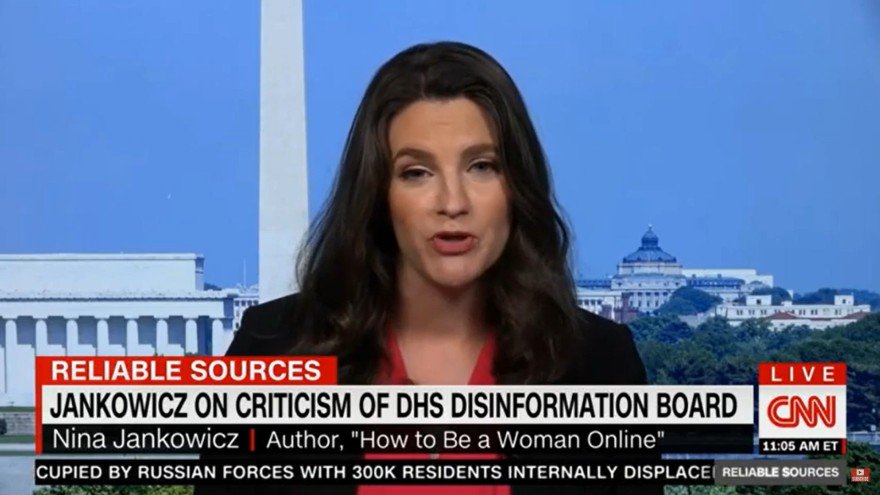 The former leader of the defunct “disinformation” board created by the Department of Homeland Security is now blaming the Biden administration for her failure.

Nina Jankowicz, the proposed leader of the Disinformation Governance Board, told CNN’s Brian Stelter in a recent interview that the administration failed to defend her reputation.

Jankowicz accused the White House of silencing her so she could not defend herself or the proposed board.

Conservatives labeled it the “Ministry of Truth,” in a move to point out its Orwellian nature. This week, the New York Times reported on the failure of the board and highlighted the success of conservative media leaders, such as Jack Posobiec, who helped expose and disband the government’s attempt at wider censorship.

In the interview, Jankowicz told Stelter that the board was meant “to bring best practices to bear, and to make sure that we were up with the latest research, the latest trends, in disinformation and countering it and make sure that work was being done in a way that protected freedom of speech, protected civil rights, civil liberties, and privacy.”

“So, the sympathetic view, to you, is that the Disinformation Board was the victim of disinformation. Is that how you feel?” Stelter asked.

Her response was a poignant jab at conservatives and Republican leaders.

As if pointing out the conservative views as being correct, Stelter then asked why DHS did not defend Jankowicz with more vigor if the criticisms were wrong.

“Yeah, I have a lot of misgivings about the way things went down and I think the first thing to point out, Brian, is that there was a disproportionate focus on me, given my level of power within the department,” she said.

“I was not allowed to speak on my own behalf, and frankly, all the communications decisions that were being made about how to talk about the board were made above my pay grade, and above my level of decision-making,” Jankowicz said.

She then highlighted her sense of entitlement, saying, “I was the executive director, but there were a lot of people that were involved that didn’t take advice frankly that I had given them.”

Stelter then pointed out the obvious mistakes and highlighted the very message conservatives had carried about the new board.

“Look, I would start with the name,” he said. “Even just the name, right, Nina, it sounds Orwellian.”

Jankowicz tried to defend the name, saying it “belies the fact that it was meant to be an internal governing mechanism, governing how the Department of Homeland Security did its work on disinformation, not governing the internet.”

Jankwoicz then took to blaming others once again. She said, “I felt like the government had just rolled over, to the critics, who had completely spun this narrative out of control based on absolutely nothing and reality and the fact that they weren’t able to defend me, the person that they had chosen, the experts that they had chosen to lead this board and safeguard this work.”

The post Defunct ‘Ministry Of Truth’ Leader Nina Jankowicz Is Now Blaming Democrats For Her Failures – VIDEO appeared first on The Gateway Pundit.