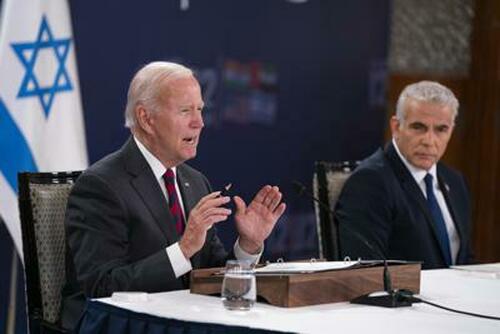 “The connection between the Israeli people and the American people is bone deep. It’s bone-deep,” President Joe Biden declared upon arriving at the Ben Gurion Airport in Tel Aviv, Israel, kicking off his brief, albeit what’s sure to be controversial, Middle East tour that will include Saudi Arabia on Friday (“bone-deep” as an expression might be a tad ironic going into the crown prince MbS meeting).

The president underscored his belief that the US relationship with Israel “is deeper and stronger, in my view, than it’s ever been.” On Thursday he and Israeli (caretaker) Prime Minister Yair Lapid signed a join pledge committing to ensuring Iran will never get nuclear weapons. Biden later in a joint presser declared the US would remain the “Last country in the world to ever walk away” from defending Israel.

One administration official was cited in regional media as saying this means the US is “prepared to use all elements of our national power to ensure” that Iran is denied nuclear weapons. Biden while responding to a journalist’s question cast stalled negotiations toward restoring the 2015 JCPOA nuclear deal as crucial to preventing Tehran obtaining nukes.

While it remains that US allies Israel and Saudi Arabia generally oppose a new or restored deal, Biden said: “The only thing worse than the Iran that exists now is an Iran with nuclear weapons.” Blaming his predecessor Donald Trump, Biden followed with, “They are closer to a nuclear weapon now than they were before.”

But perhaps the most eyebrow raising comments from the president came in a sit-down televised interview with Israel’s Channel 12, wherein he said he intends to keep Iran’s elite Islamic Revolutionary Guards Corps (IRGC) on the foreign terror list even if that means the nuclear deal with Tehran will die.

EXCLUSIVE @POTUS interview with @N12News: committed to keeping IRGC on the foreign terrorist organizations list even if it kills the deal; willing to use force “as last resort” pic.twitter.com/jWjLO0SVQz

Biden was questioned over whether he is “committed to keep the IRGC on the foreign terrorist organization list, even if that means that it kills the deal“. Without hesitation, Biden responded: “Yes.”

The president was also asked about his administration’s willingness to employ military force if it looked like Tehran was on the cusp of obtaining a nuclear weapon. Biden affirmed this is a possibility, “if it’s a last resort”.

The IRGC issue has threatened to torpedo the Vienna negotiations altogether, with Iran long having been insistent of its removal from the US terror list. However, lately Tehran has shown it’s willing to reach compromise even on this, yet movement toward a final deal has still been stalled, which Iranian officials blame on Washington seeking to sabotage a finalized agreement.

Below are further highlights from the channel 12 interview…

More from exclusive @POTUS interview with @N12News: voices in the Democratic Party calling Israel an apartheid state are “few, and they are wrong” pic.twitter.com/CkX3XRkRSL

Biden has said that he’s “optimistic” that Israel and Saudi Arabia are moving towards normalization, based on the Abraham Accords.

In the interview, he stressed that this “will take time”.

Normalisation between Israel and Saudi Arabia “will take time” @POTUS to @N12News: pic.twitter.com/4GBnv92B0A

Later, in the joint press conference with Prime Minister Lapid, Biden said his Saudi trip on Friday is focused on promoting US interests – including security and stability – so that neither China nor Russia “fill the vacuum” in a scenario of lack of US leadership and presence. Biden also again stressed that Iran will “never be allowed to build a nuclear weapon.”