The Flood Begins: Bank Of America Now Forecasts “Mild Recession” Starting In Second Half Of 2022

The Flood Begins: Bank Of America Now Forecasts “Mild Recession” Starting In Second Half Of 2022

Up until today, only two banks had dared to make a US recession their economic model base case: Deutsche Bank (expecting a 2023 recession), and Nomura (with a late 2022 recession forecast). But now that Biden inflation has come in beyond even the whisper numbers, all hope for a soft-landing is gone and over the next few hours we expect the penguin parade of Wall Street’s echo chamber to publish note after note of economic forecast revisions making a recession their base case… starting with Bank of America, whose chief economist Michael Gapen moments ago published a note titled “2022-23 US outlook: Mild recession supports a return to price stability” in which he writes that “economic momentum has faded faster than expected” and as a result, the bank now “forecast a mild recession, starting in 2H 2022.”

More details from the note, whose core assumptions are familiar to all zero hedge readers as we have been pounding the table on the Fed-induced recession scenario since, oh, December 2021. In any case, it is available to pro subscribers in the usual place:

Our previous baseline outlook for the US economy featured a growth recession (e.g., output growth remaining positive, but below our estimate of potential), but a number of forces have coincided to slow economic momentum more rapidly than we previously expected. Perhaps most worrisome to us is the trend in services spending, where revisions to prior data and i ncoming data, including from our BAC aggregated credit and debit card data, point to less momentum than we had been assuming.

We think at least some of the decline in momentum in consumer spending is due to the “inflation tax.” With much of the recent rise in inflation coming from food and energy prices, commodities that face relatively inelastic demand in the short run, households may have less available for discretionary purchases. Financial conditions have also tightened, particularly in the mortgage market, where the spread of the 30y mortgage rate to the 10y US Treasury yield has risen sharply. The large run-up in home prices and higher mortgage rates have dented affordability, slowing home sales and housing starts.

No respite from Fed hikes this year

The Fed has communicated its desire to restore price stability and a willingness to accept at least some pain in labor markets in the process. We look for the Fed to raise the target range for the federal funds rate to 3.25-3.5% by year-end, including another 75bp hike at the upcoming July FOMC meeting.

As a result, BofA writes that “we forecast a mild recession, starting in 2H 2022“

We now forecast a mild recession in the US economy this year and expect 4Q/4Q real GDP in 2022 to decline 1.4%, followed by an increase of 1.0% in 2023. In terms of labor markets, the combination of a moderate downturn this year and below-trend growth for much of next year pushes the unemployment rate 1pp higher from 3.6% currently to 4.6%. With a sharper slowdown penciled in and higher unemployment, our outlook calls for inflation to moderate somewhat faster than before. We look for headline PCE inflation to move lower to 4.9% in 2022 (4Q/4Q) and 2.5% in 2023. The equivalent numbers for core PCE are 4.1% and 2.9%, respectively. Our forecast puts inflation broadly in line with the Fed’s 2% mandate by the end of 2024.

Of course, it’s never a good look to capitulate bearishly (even if being one of the first to do so, especially since a pink slip awaits the last one on the recession bandwagon), as clients will demand how come the economist “expert” missed all those clear signs that even conspiracy theory tinfoil blogs were warnings about for months. And that’s why Gapen leaves off on a “silver lining” note, writing that “risks are skewed towards a soft landing” (narrator: actually risks are skewed to a crash landing).

We think the most likely alternative to our baseline outlook includes a US economy that avoids a nearterm slowdown and requires a second round of tightening, perhaps in late 2023 or into 2024. If we are wrong in our reading of incoming data, particularly about the strength in spending on services, then we have likely erred in the direction of underestimating current momentum. If so, then the recovery is likely to persist with GDP growth slowing only modestly, leaving the Fed with more work to do at a later date.

That’s rubbish. If anything the risk is that the recession turns into a full-blown depression as the housing market is already hinting. But there is one thing that can avoid this: a capitulation by the Fed. And sure enough, the market is already pricing that in because now that it just boosted the number of expected rate hikes through Dec to 8 (including 25% odds of a 100bps rate hike next week), the market is now forecasting a series high 17bps of rate cuts in Q1, a number which will only grow… 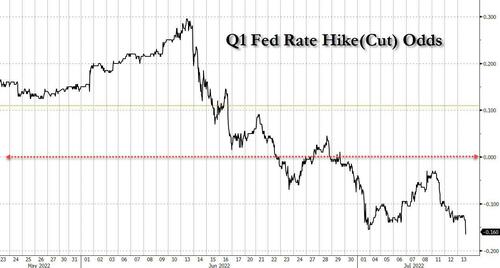 … and send stocks higher because as a reminder, the bear market ends when the recession begins and when central bankers begin to panic.