Shortly after today’s shocking CPI print, which saw odds for a 100bps July rate hike jump to 35%, we – and apparently everyone else – wondered if the Fed’s favorite trial balloon leaker, WSJ reporter Nick Timiraos (the person who rushed out to inform markets back during the June blackout period that the Fed would hike 75bps after that red-hot UMich inflation expectation number which was subsequently revised lower) would tactically inform the market that a 100bps rate hike is coming.

All eyes on Nick Timiraos with the hundo leak

We got the answer shortly after 10am, when contrary to rising expectations of a 100bps hike, the WSJ whisperer made it clear Powell is sticking with 75bps.

In an article titled “Inflation Report Likely to Seal Case for Fed’s 0.75-Point Rate Rise in July“, Timiraos writes that “another big increase in consumer prices last month keeps the Federal Reserve on track to raise its benchmark interest rate by 0.75 percentage point at its meeting later this month.”

The Fed’s June rate rise, its largest since 1994, lifted its benchmark rate to a range between 1.5% and 1.75%. Many Fed officials had already signaled they were prepared to support another 0.75-point increase at their July 26-27 meeting to raise rates quickly to levels high enough to slow the economy, and Wednesday’s report adds to that urgency.

Fed leaders had indicated in recent weeks the central bank was likely to debate an increase of either 0.50 percentage point or 0.75 point at its meeting in two weeks. But investors in interest-rate futures markets dialed up their expectations Wednesday that rates might rise by a full percentage point at the meeting. Market probabilities of a one-percentage-point increase rose to around 38% in the hour after the inflation report, up from 12% before its release, according to CME Group.

There’s more in the full WSJ note but you get the jist. And before anyone laments that the Fed will “only” hike 75bps, here is some context: “the back-to-back 75 basis point rate hikes that now seem set for June and July: That’s more than two years’ worth of tightening in the last cycle!” Sure enough, considering that the Fed Funds rate will be that much closer to the restrictive 3% in just over a week, it’s no surprise that the market today priced in as much as 23bps of rate cuts in Q1 2023.

As for taking 100bps off the table, stocks were happy with spoos going vertical shortly after 10am when the Timiraos article hit. 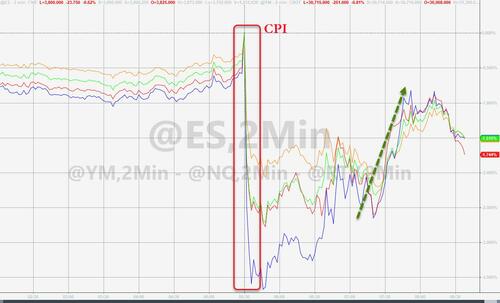