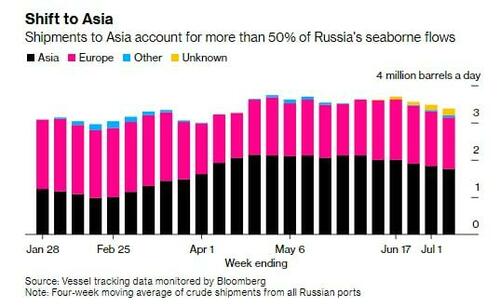 Days ago Reuters reported that Indian imports of Russian oil surged in June, reaching 950,000 barrels of cheap Russian oil per day. From May (where India imported 819,000 bpd) this marked a 15.5% rise, while simultaneously imports from its number one and (now) number three suppliers – Iraq and Saudi Arabia – dropped 10.5% and 13.5%, respectively. And this is a massive leap up from from the 277,000 bpd imported in April.

The Reuters report further underscored that as the West moves to ban and sanction Russian oil altogether, it’s China and India that now account for 50% of Russian seaborne exports, lured by hugely discounted prices compared to the Brent international benchmark.

As we’ve been detailing, Russia’s energy earnings are already back to pre-war levels after five months of round after round of US and EU sanctions intended to “punish” Moscow and President Vladimir Putin, with analysts widely estimating Russia’s energy sales are now on track to reach $285 billion this year.

And the idea in Washington and Brussels all along was that efforts to block or impose a (currently still under discussion) price cap on Russian oil would somehow hinder the ongoing Russian assault on Ukraine. Instead, there appears the opposite effect emerging with blowback on US and EU populations amid higher prices at the pump.

Yet still, Treasury Deputy Secretary Wally Adeyemo recently acknowledged the lure of cheap oil could be used to get wayward countries like India or China on board, saying in statements to The Associated Press, “We think that ultimately countries around the world that are currently purchasing Russian oil will be very interested in paying as little as possible for that Russian oil.”

While the West sanctions Russia, India is importing 25x more oil from Russia than it did a year ago. Economics is a game of incentives. India is taking full advantage of discounted oil. SPOILER ALERT: sanctions always have workarounds. https://t.co/4wZjAvljvP

But so far they remain the chief, powerful hurdles to the possibility of any effectiveness to any proposed EU price cap plan:

James Hamilton, an economist at the University of California, San Diego, said garnering the participation of China and India will be important to enforcing any price cap plan.

“It’s an international diplomatic challenge on how you get people to agree. It’s one thing if you get the U.S. to stop buying oil, but if India and China continue to buy” at elevated prices, “there’s no impact on Russian revenues,” Hamilton told the AP.

“The less revenue Russia gets from selling oil, the less money they have to send these bombs on Ukraine,” he said.

Currently, US Energy Secretary Jennifer Granholm is in Sydney for energy talks, where high on the agenda is to get the Quad nations – especially India and Japan – on board with a Russian oil price cap policy.

As earlier previewed in Bloomberg:

Granholm is scheduled to meet with counterparts from the Quad group of nations — Australia, India, Japan and the US — during a visit to Sydney that’ll also touch on cooperation on supply of critical minerals needed for clean energy technologies.

“We want to put on the table the option of joining a buyers’ group that will have greater market power to be able to lower the price, and therefore lower the price of Russian oil and lower the profits to Putin,” Granholm said Monday in an interview in Sydney.

Had a bilateral meeting with US State Secretary of Energy @SecGranholm. Discussed on various aspects of mutual cooperation in Energy Transition, Storage technology and investment in R&D of cutting edge clean technologies. pic.twitter.com/P3tbLyfz15

But as emphasized in fresh analysis in Foreign Policy on Wednesday, all indicators are that New Delhi will continue rejecting these pleas “to act” out of the Biden administration. Like with last month’s G7 summit, India’s silence and apparent cold shoulder to the Biden administration’s urgings is speaking louder than words during Quad meetings in Sydney too.

“Leaders of 12 democracies huddled in an Alpine resort in Bavaria last month,” FP recounted. “They included presidents and prime ministers of the G07 group of industrialized nations as well as their counterparts from India, South Africa, Indonesia, Argentina, and Senegal,” the report continues.

“But the handshakes, embraces, and jokes couldn’t mask the deep divide among them: While the G07 leaders’ closing communique focused on Russia’s war in Ukraine and efforts to cut the Kremlin’s earnings from energy exports, the 12-nation statement didn’t mention Ukraine, the war, or even oil once.”