EXCLUSIVE: PRO-CLINTON Super PAC To Spend MILLIONS In The Final Four Weeks Of The Arizona Republican Primary for Governor AGAINST Trump-Endorsed Kari Lake 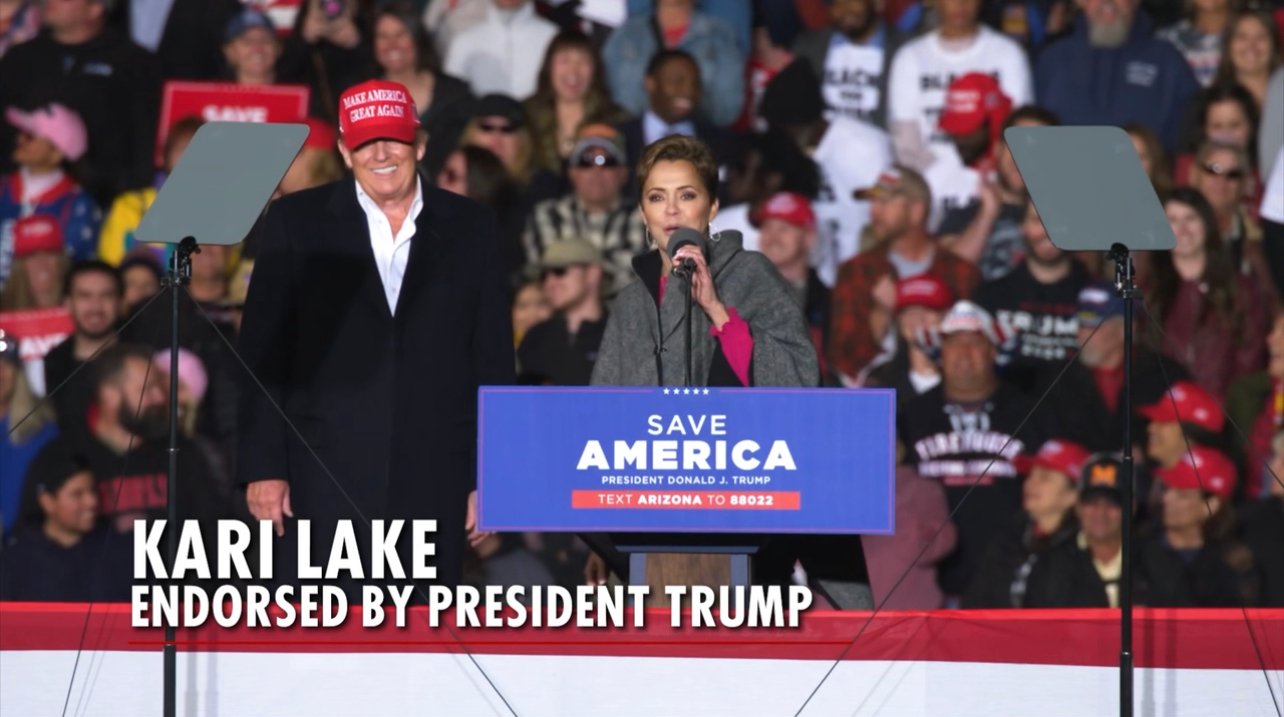 Establishment RINO Karrin Taylor Robson and her elitist friends are trying to buy the 2022 Arizona Gubernatorial election to enrich themselves and continue their reign of power.

An anti-Kari Lake super PAC has pledged 3.6 million dollars in support of Karrin Taylor Robson. Kari Lake will drain the Arizona swamp, and they are terrified of her!

Robson, a longtime lobbyist and Arizona business elitist, is running for Governor to serve herself and her wealthy friends in real estate and land development. Her own husband, 91-year-old Ed Robson, is a billionaire Arizona real estate developer.

The Gateway Pundit has reported that Karrin Taylor Robson is a fake Republican with a hardcore liberal record. She frequently attacks Kari Lake for a $350 donation to Obama 15 years ago but refuses to admit that she has donated thousands of dollars to Arizona’s liberal Democrats as recently as 2020.

The Gateway Pundit recently reported that the Arizona Democrats released a statement thanking Robson for “funneling thousands of dollars to Democratic candidates.”

Robson is using her money and connections to win because she does not have good policy. She would be a weak and self-serving Governor.

In several of her advertisements, Taylor Robson claims to be a “conservative outsider.” But Taylor Robson has, for decades, run in influential circles.

She’s been a precinct committeewoman for nearly three decades, an elected but low-ranking post. In 2020, she chaired the Republican Legislative Victory Fund, which spent over $850,000 to keep Republicans in control of the state Legislature.

She led the Joe Foss Institute, a leading advocacy group for civics education that fueled Ducey’s interest in the topic, and on the board for the Arizona Chamber of Commerce.

She lobbied from 2018 to 2021 on behalf of Arizona Public Service Co., one of the deepest-pocketed and most-influential organizations in state politics, to build power substations in downtown Phoenix.

Taylor Robson’s campaign said she helped the nonprofit with a single real estate deal near the airport. Chicanos Por La Causa honored her for that work in 2020 during its annual dinner.

And she also was selected by the governor to help oversee the state’s three universities.

She’s spent over $4 million from her mostly self-funded campaign bank account, and that’s only through the end of March, the last time candidates had to disclose their finances. One leading opponent, Kari Lake, tallied Taylor Robson’s spending on advertising alone at $12 million, but Taylor Robson declined to provide a more current spending figure.

Lake tweeted about Karrin’s “out of touch” campaign spending while Arizonans feel the pain of Joe Biden’s record inflation.

Your family can’t pay for gas.

The value of your house is about to burst.@Karrin4Arizona sits in a mansion and spends two million dollars a week to try to buy this election.

Talk about out of touch.

Failed Primary candidate RINO Matt Salmon even admitted that Karrin Robson is using her billions of dollars to buy this election just before he dropped out of the race to endorse Robson. She is also endorsed by RINO Governor Doug Ducey

The American Focus PAC is launching its final phase of a campaign to help Robson take down the Trump-Endorsed candidate for Governor, Kari Lake. The PAC intends to spend another 3.6 million dollars with hopes to “deliver impactful anti-Lake messages that have been tested through both polling and focus groups.”

Under the “candidates” section of AmericanFocusPac.org, Hillary Clinton and Bernie Sanders are both listed.

The Gateway Pundit has obtained a copy of an email and PDF shared by Mike Ingram, one of Robson’s developer friends and the founder and chairman of El Dorado Holdings. El Dorado Holdings a longtime real estate development firm in Phoenix, Arizona.

Ingram shared the PDF with his friends in the business community, asking them to support Karrin Robson. Like him, many email recipients were already maxed out in donations for Robson. The document can be seen below.

expenditures in the final four weeks of the Arizona Republican Primary for Governor. This is the

final phase of a larger ongoing effort that, to date, has spent $3.6 million both in support of

Karrin Taylor Robson’s campaign for governor and in opposition to Kari Lake.

These efforts have helped Robson close a more than 30-point gap with Kari Lake, and her

campaign now trails by mid-single digits as we enter the final, crucial stage of the campaign.

In this final phase, AFPAC will deliver impactful anti-Lake messages that have been tested through both polling and focus groups. We believe the following 3-pronged approach will help fill a strategic gap in Robson’s current campaign, and help ensure victory on August 2nd:

1. Persuasion: Through broadcast, cable, addressable satellite, OTT/Connected TV streaming services, and digital advertising, AFPAC will target persuadable voters and avoid duplicating spending by the Robson campaign. Under this plan, we will deliver 2 anti-Lake messages to a universe of approximately 300,000 voters: Cost: $2.2 million

2. Expansion of the electorate: Through targeted mail, phones, and SMS/text, AFPAC will target more moderate, Independent voters, in an effort to expand the electorate and encourage this group to participate in the GOP Primary by requesting a ballot. The message is simple: Arizona can’t afford Kari Lake and this is the time to stop her. Cost: $425,000

3. Consolidation of the Anti-Kari Lake vote: Through mail, phones, texting, and digital advertising, AFPAC will target supporters of Rep. Matt Salmon, who continues to garner 10-12 percent of the vote in the primary, in an effort to persuade them to vote for Robson in order to stop Lake. The message is simple: voting for Matt Salmon is throwing away your vote and throwing the election to Lake. Cost: $475,000.

The RINO/Democratic establishment has already bought Karrin off and will clearly spend whatever it takes to remove the Trump-Endorsed candidate from the race.

Lake: Karrin Taylor Robson has a shady history, her campaign is full of lies, and all the insiders are flocking to her. People need to ask, ‘why’?

Taylor Robson has a questionable history as a lobbyist greasing the way for a lot of insider land deals. Taylor-Robson’s campaign has raised money unethically, just flat lying to people about who they were donating to. Her attacks on me are bogus. She’s not an ethical person. The only reason I can think of that these people are siding with her is they plan to get something out of it – access to the State Land Trust, state contracts, key positions for their friends, whatever they want.

And, obviously, if you’re someone more interested in lining your pockets than doing what’s right for Arizonans, you’re backing Karrin.

I don’t play those games.

The post EXCLUSIVE: PRO-CLINTON Super PAC To Spend MILLIONS In The Final Four Weeks Of The Arizona Republican Primary for Governor AGAINST Trump-Endorsed Kari Lake appeared first on The Gateway Pundit.