“America Will Not Allow This to Go on for Much Longer” – President Trump Responds to Biden’s Record 9.1% Inflation 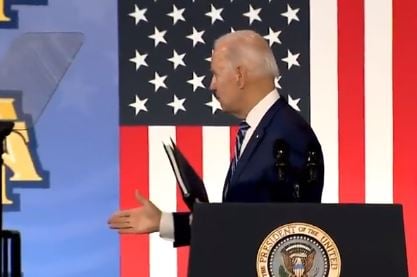 (Above Joe Biden turns to shake hands after a speech and no one is there.)

The BLS released its latest number on inflation and they were horrible.  Inflation is up to the highest rate since 1981.  It doesn’t get any worse than this.

Inflation just hit ANOTHER 40-year high of 9.1%, which is terrible for our Country. Fuel prices up 60%, Airfare up 34%, Eggs up 33%—how can people survive this? How can businesses survive this? Our Country is so weak right now because the Radical Left Democrats have no clue what they are doing. All they want to do is “get Trump,” and they are willing to destroy our Nation to do it. America will not allow this to go on for much longer. Don’t vote for the Radical Left Democrats, vote for America First Republicans—Save America! The post “America Will Not Allow This to Go on for Much Longer” – President Trump Responds to Biden’s Record 9.1% Inflation appeared first on The Gateway Pundit.