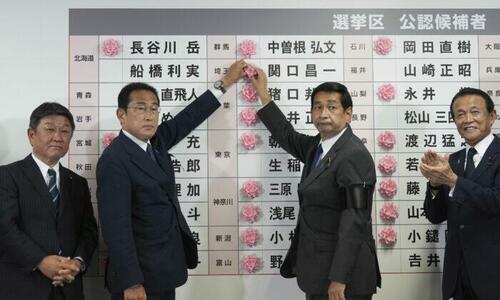 Authored by Aldgra Fredly via The Epoch Times (emphasis ours)

Japan’s ruling center-right party scored a supermajority in the House of Councillors election on July 10, claiming more than half of the 125 contested seats, in the wake of the assassination of former prime minister and party leader Shinzo Abe.

This has secured for the party the two-thirds majority required to amendment Japan’s pacifist post-war Constitution. As part of Abe’s Japan-first policies, he was looking to revise Article 9, forbidding Japan from possessing its own military or forces with “war potential.”

If unchallenged by other factions within the party, the victory will allow Kishida to preside until the next election in 2025. Kishida, a moderate from Hiroshima who wants nuclear weapons banned, represents the smaller, more left-leaning liberal wing of the LDP, while Abe lead the right-leaning nationalist wing.

Kishida is more dovish on foreign policy than Abe, who was considered hawkish on China for his revitalising of the Quad forum and nationalizing of the uninhabited Senkaku islands that China contests as part of its territory—the Diaoyu islands.

The LDP held a moment of silence for Abe at its Tokyo headquarters. Kishida carried a solemn expression as he placed victory ribbons next to the names of winning candidates on the whiteboard, The Japan Times reported.

“Violence threatened the electoral process, the very foundation of our democracy. I was determined to go through with this election at all costs,” he said, referring to the shooting of Abe that occurred two days before the poll.

Speaking at a press conference, Kishida said that his administration will focus on addressing the COVID-19 pandemic, the Russia-Ukraine war, and the soaring cost of living. He also pledged to revive the Japanese economy.

“I am determined to achieve results as part of my ‘new capitalism’ economic model, which is aimed primarily at revitalizing the economy,” he said.

“At the same time, I will take a step-by-step approach to continue our work on diplomacy, security, and constitutional revision.”

Asked about the plans for constitutional revision on Sunday, Kishida said that he would focus on putting together a bill to be discussed in parliament.

Abe, Japan’s longest-serving leader, was fatally shot on July 8 during a campaign speech in the western city of Nara. Police arrested a 41-year-old man who allegedly shot Abe at close range, and said the suspect had used a homemade gun.

The local police force manning the campaign event said on Saturday that security arrangements had been flawed.

Local media reported that the suspect, Tetsuya Yamagami, told police that he intended to kill Abe because he believed that the ex-premier was connected to a religious organization that had bankrupted his family. Police have not identified the group.

Abe’s death has drawn condolences from across political divides, and from around the world. U.S. Secretary of State Antony Blinken visited Tokyo on Sunday to offer condolences over Abe’s death and to meet with senior Japanese officials.

“Thank you, Prime Minister Kishida, for the opportunity to visit and pay my respects to mourn with you and your nation a great statesman. We are deeply saddened over the killing of one of our dearest friends. The U.S.-Japan alliance will always remain strong,” Blinken said on Twitter.

Many Japanese have been in mourning Abe’s assassination, with hundreds visiting the LDP headquarters over the weekend to remember the former prime minister. Abe’s wake will be held on Monday night and funeral for family and close friends on Tuesday.