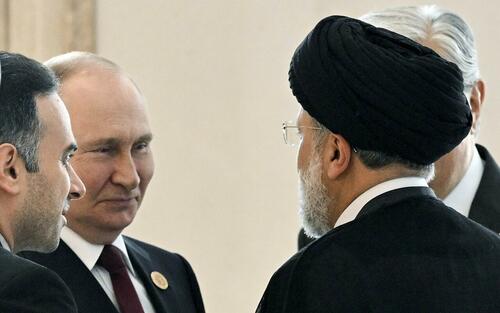 The Kremlin has announced that Russian President Vladimir Putin will visit Tehran next week, in what will mark only his second trip outside of his country since the Ukraine war began. Late last month he traveled to Tajikistan and Turkmenistan, and attended a regional security summit.

“Yes, we can confirm that. Arrangements are underway for the president’s visit to Tehran. A meeting of the leaders of the states that serve guarantors for the Astana peace process will take place there,” Peskov described. The trip will take place on July 19, he added.

“Yesterday, we announced highest-level contacts between Putin and Erdogan. Well, such a meeting will also take place there,” Peskov said further, referencing the Iranian capital.

The Astana process is in reference to an agreed upon security arrangement chiefly impacting northern Syria which has been in process for the last several years since being initiated in Astana, Kazakhstan. It attempts to achieve a status quo toward ending the Syria conflict and combatting terrorism.

The timing of the Kremlin announcement is interesting given less than 12 hours prior in a Monday afternoon press briefing, national security adviser Jake Sullivan claimed that Iran is preparing to transfer “up to several hundred” armed drones to Russia amid possible arms and munitions shortages amid the Ukraine war.

Sullivan told reporters, “Our information indicates that the Iranian government is preparing to provide Russia with up to several hundred UAVs, including weapons-capable UAVs on an expedited timeline.”

As we described previously, the allegation marks the first time that Iran has been accused of helping Russia amid its ongoing assault on Ukraine. The new charge is unusual and curious given Russia already maintains an advanced drone program, and in general its military is considered high-tech and is deemed rival to other major superpowers like the US and China, especially in the area of hypersonic weapons technology. Naturally, this leaves some pundits wondering why Russia would need a whole large fleet of drones from Iran of all countries.

Does Iran even have “hundreds of weapons-capable drones” to export? It has limited production capacity; would be surprising (to say the least) if it could churn out hundreds, let alone hundreds of useful weapons systems rather than worthless tchotchkes. https://t.co/akccc8Qlc6

The geopolitical analysis blog Moon Of Alabama has laid out the case for skepticism regarding the new White House claim, paralleling Sullivan’s charge of a major Iran-Russia drone deal with prior administration assertions that China was militarily supplying Moscow to assist its assault on Ukraine. The allegations against Beijing didn’t pan out as no evidence or any level of confirmation emerged.

“The whole issues is just a talking point designed to put Iran and Russia into the same ‘baddies’ binder for Biden’s talks in the Middle East,” writes Moon of Alabama, given Sullivan’s comments came in a briefing previewing Biden’s Wednesday trip to Israel and Saudi Arabia. “The countries there may not like Iran but they will certainly not allow for a condemnation of Russia.”