New NYC PSA on “What to Do in a Nuclear Attack” Instructs Citizens to “Get Inside, Stay Inside, and… Follow Media” For Updates – “Officials” Will Notify You “When it’s Safe” 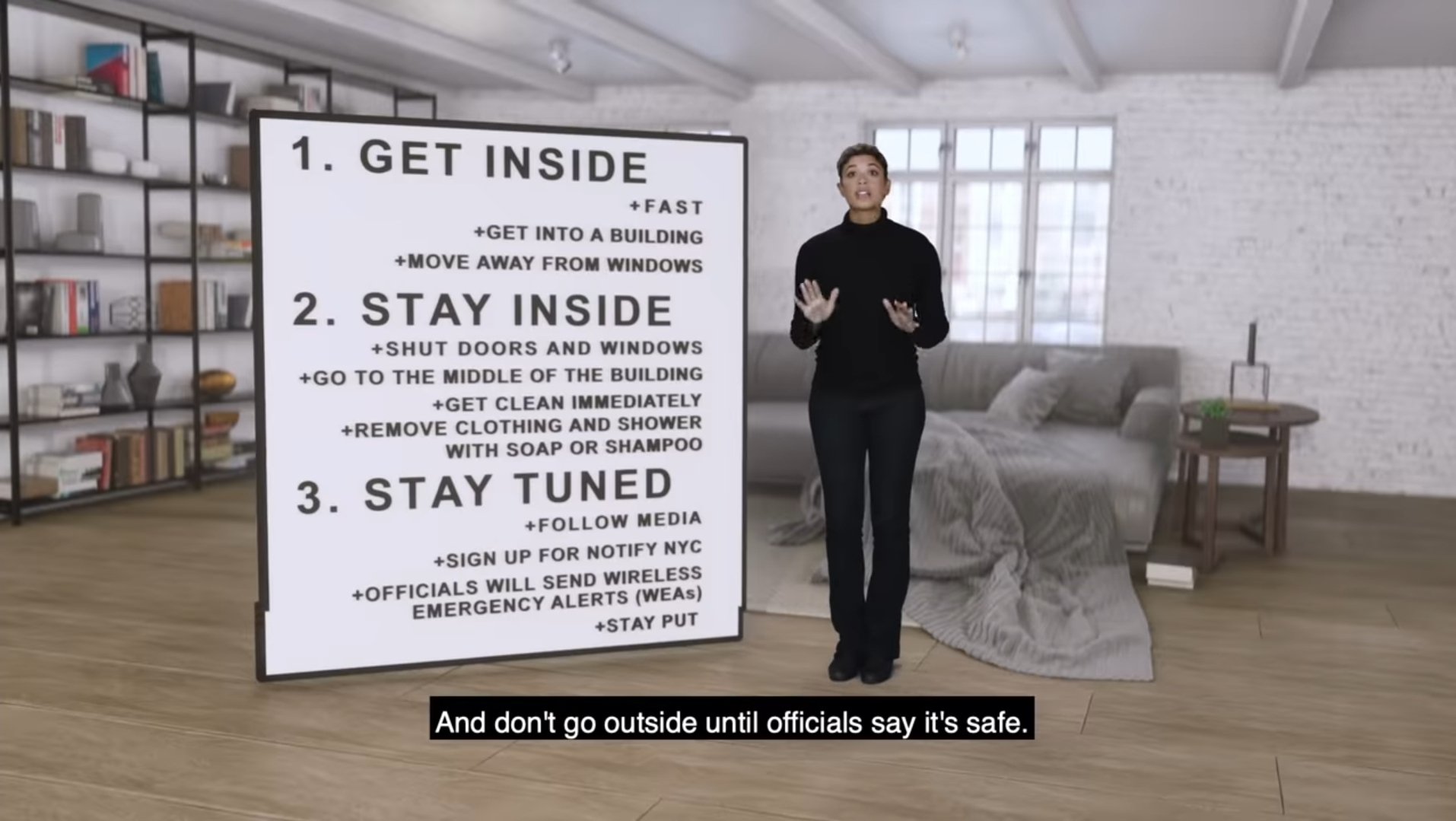 On Monday, the city of New York launched a new public service announcement (PSA) that provides guidelines about what residents should do in the event of a nuclear attack.

Unfortunately, New Yorkers who watch the PSA will likely be severely ill-prepared should a nuclear weapon detonate in their vicinity, as the video provides little in the way of specifics or useful information. Instead, the short clip instructs citizens to follow a rudimentary 3 step plan that leaves them completely reliant on the powers that be to come to the rescue.

According to the PSA, New Yorkers should 1) “Get inside” 2) “Stay inside” and 3) “Stay tuned” – or, as the narrator clarifies, “follow media” – in the event of a nuclear attack. After walking through the steps, the narrator hammers home the last point by commanding that the audience “don’t go outside until officials say it’s safe” to do so.

The video does not address what to do if one requires medical attention or food.

Sounds awfully similar to another step-by-step process that has been pushed recently – wasn’t get inside, stay inside, and don’t come out until the experts deem you can the basis of Covid lockdowns?

Wash. Rinse. Repeat. However, this time we are talking about a nuclear attack – something much more deadly than the fear-porn peddling Covid cultists could ever hope for with the virus.

But, instead of preparing the public for the horrific scenario, the lack of relevant information in the NYC PSA aims to create dependent masses who are reliant on the experts. And, it’s at a time when we are knee-deep in a proxy war with a country that possesses over 4,000 nuclear warheads.

It’s no coincidence this type of PSA is being released with what’s going on in Europe and the Pacific – whether it be to stoke fears or because of a legitimate, burgeoning threat. Nevertheless, the likelihood of a nuclear attack hitting NYC is currently slim to none, even according to the NYC Emergency Management Department, which put the chances of a strike at “very low.”

But, according to NYC’s Emergency Management Commissioner Zach Iscol, the threat of a nuclear strike is “imminent.”

Come again? Iscol either doesn’t know what the word imminent means – “about to happen” – or he knows something we don’t – let’s go with the former.

Iscol issued a statement along with the PSA’s release:

“As the threat landscape continues to evolve, it is important that New Yorkers know we are preparing for any imminent threats and are providing them with the resources they need to stay safe and informed.”

Despite claiming that the department is “providing resources” to inform the people, this is simply not the case. Arguably, the only useful bits of information provided in the entire video are instructions to “get clean immediately” and “bag and separate clothing” if you were outside during the blast.

“If you were outside after the blast, get clean immediately. Remove and bag all outer clothing, to keep radioactive dust or ash away from your body,” the PSA explained.

Surely, there is more useful information that could be shared – for example, the PSA tells people to shelter inside and avoid windows. It does not, however, tell them to seal off all gaps and exits to keep radioactive materials out of the building – something that’s necessary if an individual is planning on sheltering in place for an extended period, even if it’s just a few days. But, no. All New Yorkers get from their emergency preparedness department is essentially to ‘sit tight for instructions and don’t ask questions.’

In other words, relying on the ‘officials’ will seemingly get you nowhere, and fast. A quick google search would do more to educate than the new PSA.

Making things even worse, the narrator of the video has a shockingly glib attitude toward the catastrophic situation she is describing. In just one example, she opens the video by stating “so, there’s been a nuclear attack,” as if it’s something that happens daily, before telling the watcher “don’t ask me how or why – just know that the big one has hit. Ok?”

She then rolls into the step-by-step explainer by nonchalantly saying “so, what do we do?”

As usual – Don’t ask questions, the experts will take care of it. It’s for your health.

After instructing the audience to remain dependent on the experts for direction yet again, she closes the PSA on an equally glib note, telling the audience: “All right? You’ve got this.”

The post New NYC PSA on “What to Do in a Nuclear Attack” Instructs Citizens to “Get Inside, Stay Inside, and… Follow Media” For Updates – “Officials” Will Notify You “When it’s Safe” appeared first on The Gateway Pundit.