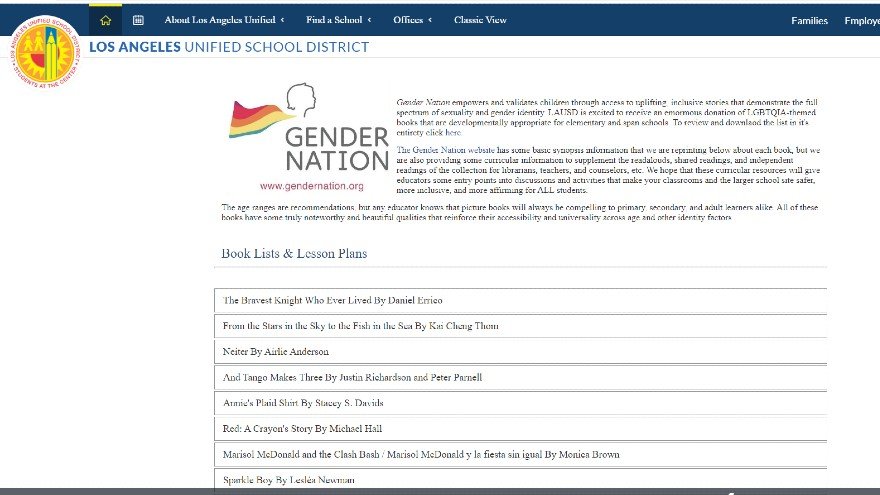 The nation’s second-largest school district has teamed up with a group of activists to provide resources and lesson plans focused on promoting gender transition for children.

Open Books is one of the organizations partnered with LAUSD. The group aims to “validate children with LGBTQ+ storytelling” by furnishing public schools with books that endorse gender transitions for children. The school district’s Human Relations, Diversity, and Equity website explains that the schools received “an enormous donation of LGBTQIA-themed books that are developmentally appropriate for elementary.”

The site says, “We hope that these curricular resources will give educators some entry points into discussions and activities that make your classrooms and the larger school site safer, more inclusive, and more affirming for ALL students.”

One of the 16 books the district promotes is “When Aidan Became a Brother,” which is intended for children as young as five and follows a child who wants to change her sex. The book follows along as she attempts to change her sex and prepares to present herself as a boy.

The book’s description says, “When Aidan was born, everyone thought he was a girl. His parents gave him a pretty name, his room looked like a girl’s room, and he wore clothes that other girls liked wearing. After he realized he was a trans boy, Aidan and his parents fixed the parts of his life that didn’t fit anymore, and he settled happily into his new everyday.”

The book is paired with a list of questions from the Anti-Defamation League (ADL). They include, “How does Aidan feel when people ask if the baby is a girl or a boy?” and “How do Aidan and his family approach the gender of the baby differently than many people do? To what extent do you think this is because Aidan is transgender?”

The guide asks students, “Have you ever asked about the gender of a baby before the baby was born? After reading the book, do you think about that differently? Please explain.”

The guide also tells teachers, “You can explain that when Aidan was born, his parents and the doctors thought he was a girl—but Aidan knew he was a boy.”

The ADL’s Education Department previously named “When Aidan Became a Brother” their book of the month.

This is just the latest step by the school district to indoctrinate its more than 600,000 children.