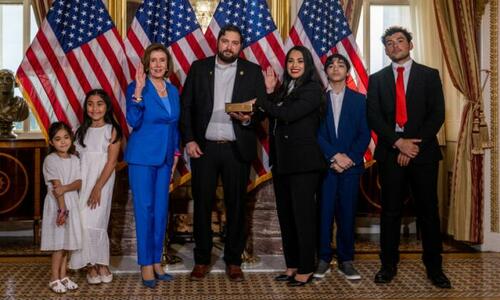 Authored by Darlene McCormick Sanchez via The Epoch Times (emphasis ours),

Mayra Flores (R-Texas), whose political Cinderella story made her the first Mexican-born woman to serve in Congress, isn’t feeling any love from the Left.

Flores ran on a conservative platform of God, family, and country, in a special election to flip Texas District 34 red for the first time in more than a century.

On July 6, the New York Times labeled her and two other South Texas Latina candidates as far-Right.

“It amazes me that because my values are rooted in God, family, and country, the liberal media takes it upon themselves to attack me and label me ‘far-Right.’

“But at least they used the word ‘Latina’ over their other made-up terms. Seguimos Adelante!” Flores said in a statement posted on Twitter.

The newspaper highlighted social media posts asserting Flores’ belief that Donald Trump had won in 2020 and President Joe Biden should be impeached.

The article questioned her use of QAnon hashtags in the past. It noted her pro-life conservative views and that her pastor appeared at her swearing-in.

Flores has denied any connection with QAnon and told the New York Times she intended to oppose the group, which believes Democrats are Satan-worshiping, cannibalistic pedophiles.

Flores has brushed off the criticism and is sticking to her platform, where she openly embraces, “Make America Godly Again.”

It is key to understanding how Flores’ path took her from the cotton fields of Texas to the halls of Congress.

She told The Epoch Times that her faith became the driving force behind her decision to run for Congress, although she had little political experience.

“It played the biggest role for me,” she told The Epoch Times. “I feel our values are being lost. So for me it was really about God.”

Flores wants to “take Jesus to Congress” and believes people need to stand up and not fear criticism for their faith. She believes people are hungry to hear about God and wants to see prayer put back into the classroom.

“We are in so much of a mess because we have put God aside,” she said.

She will finish the term of U.S. Rep. Filemon Vela (D-Brownsville), who resigned to work for Akin Gump, a Washington D.C. law and lobbying firm.

Flores hopes to win a full term in Congress in November by defeating moderate Democrat Vicente Gonzalez, who is switching districts because the Republican-led Texas Legislature redrew the South Texas voter map, moving his McAllen home from District 15 into District 34.

But the midterm election stands to be a more challenging race for Flores, given that the redrawn Congressional District 34 is much more favorable for a Democratic win.

Gonzalez is running on some popular Democratic themes, such as free college and pre-K.

He is more moderate on border issues. He supports “compassionate” immigration reform with a pathway to citizenship but remains committed to the health and safety of the people he is sworn to represent.

As a Catholic, Gonzalez said he’s pro-life but believes in the separation of church and state, according to an article in The Hill. Gonzalez’s campaign has not responded to a request for an interview.

Flores’ celebrity status as a Latina Republican has Democrats pushing back and vowing to put the muscle of their political machine to work flipping the seat back to blue.

Gonzalez recently told Newsweek Flores was an “unqualified” opponent and a pawn of the Republican Party.

But Flores is keeping the faith—literally. From the beginning, she has turned to City Church in Harlingen and pastor Luis Cabrera for support.