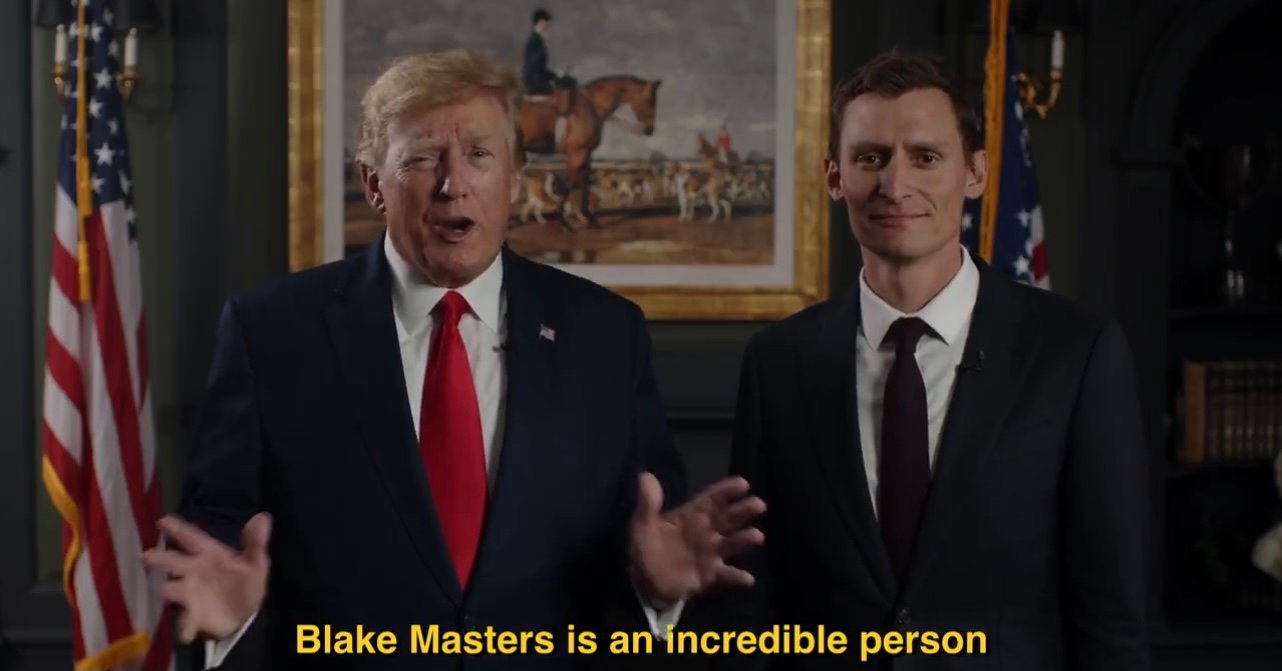 Trump-Endorsed US Senate Candidate Blake Masters recently spoke up about the need for federal voter ID and citizenship requirements when voting at a US Senate candidate forum hosted by Freedom Works in Phoenix, Arizona.

This occurred before the lawless and illegitimate Biden Regime launched a lawsuit against Arizona seeking to block a new law mandating safeguards that prevent illegal immigrants from voting in federal elections. The Democrats will stop at nothing to allow cheating in our elections.

The Gateway Pundit recently reported that the Biden DOJ sued Arizona to stop HB2492 from taking effect next year.

This new law would also apply to Federal Only voters who are not required to show proof of citizenship when registering to vote.

The Gateway Pundit reported extensively on the outright fraud that was discovered in Arizona’s 2020 Election by multiple investigations, including the Maricopa County full forensic audit and the “2000 Mules” documentary. The hundreds of thousands of potentially fraudulent or illegal ballots led to just two guilty pleadings in Yuma County because Arizona Attorney General and failing Senate Primary Candidate RINO Mark Brnovich failed to enforce the law.

As The Gateway Pundit reported, Trump-Endorsed Kari Lake also responded to this corrupt lawsuit on Steve Bannon’s War Room last week. Like Kari Lake, Blake Masters is Trump-Endorsed, and he is the only candidate who is willing to admit the 2020 Presidential Election was Rigged and Stolen.

President Trump has endorsed Blake Masters more than once, telling voters that Blake’s RINO primary opponents, Jim Lamon and Mark Brnovich, “will only let you down.”

During last month’s Arizona Senate Primary Candidate Forum, Blake Masters gave his solution to this crisis of illegal immigrants voting in American Elections. As Blake told the crowd, more “federal-only” voters voted without proving their citizenship than Joe Biden and the Democrats stole the election by.

Masters: Hey guys, tell me if this is too extreme. I don’t think that in the United States of America, you should be able to cast a vote without showing an ID. I also don’t think in the United States of America, you should be able to register to vote without proving you’re a US citizen. How about that? Now, it’s true, we want states and municipalities to run their own elections. We do not want to federalize or nationalize elections. That’s what the Democrats want to do. But I’m okay with some baseline federal standards here. Those two I just said. You got to show ID in order to vote and you got to be a US citizen in order to vote. Okay? The Constitutional hook for this is in the Constitution, right? It’s right there, States are guaranteed a republican form of government.Well, if California, or Oregon, or Arizona, is allowed to let people vote without showing an ID I don’t think you can guarantee a republican form of government. Okay, so that’s the one bill I want at the federal level. And we did not have this in 2020. I’m the one candidate bold enough to say, I think if every election official nationwide followed the law, followed the rules, President Trump would right now be in the Oval Office, and the world would be so much better off. But that didn’t happen and we had politicians in office who were too scared to do anything about it. So, here’s the thing. Great, you can ban ballot harvesting. Arizona did that. It’s true, Mark Brnovich defended that law. I think it would have been really hard to lose that case in the Supreme Court. They have six conservative votes. But ballot harvesting being illegal doesn’t do a darn thing if you don’t enforce it. I don’t think we enforced it. In Arizona. 11,600 people voted on what’s called a federal-only ballot. They voted for President, 11,600. To get that federal on the ballot, all you had to do was check a box, saying, ‘I swear I’m a US citizen.’ No ID. We let 11,600 people vote for president on the honor system. The difference officially between Biden and Trump in this state, 10,500. We’ve got to fix this if we want to have a free Country.

MAAP Real Talk Show’s George Nemeh covered this event and shared footage from the entire forum on his Rumble page.

Blake Masters understands what needs to be done to secure our elections.