BREAKING: Wisconsin Candidates for Office Call for Decertification of 2020 Election Based on Maladministration of Election Due to the Use of Unconstitutional Drop Boxes 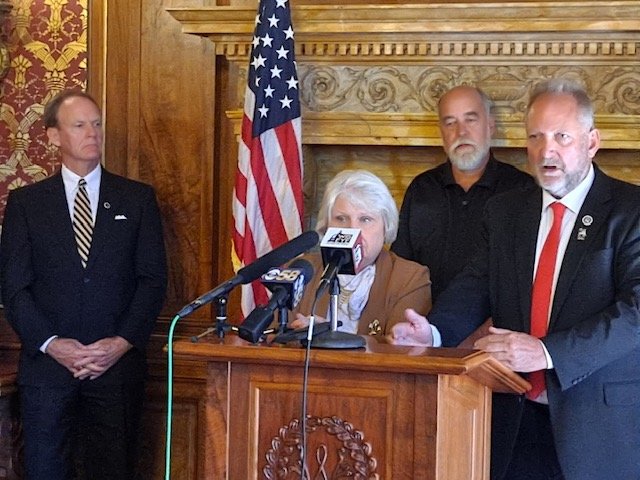 State Representative Timothy Ramthun, who is running for Governor in Wisconsin, released this press release this morning with a call to action. Ramthun and Mueller reminded those in attendance that the Wisconsin Supreme Court recently ruled that the drop boxes in the state are not legal in the state.

The GOP candidates shared that if the drop boxes aren’t legal under election law, then the ballots that were collected in drop boxes in the 2020 Election were not legitimate.   The number of ballots dropped in the drop boxes in Wisconsin way outnumbered the margin of win given to Joe Biden. Because of this, Representative Ramthun says the election should be decertified.  There are remedies for this and the most prominent remedy over the past 30 years is to do the election over.

The blame here goes to the public officials who put in the ballot boxes and not the voters.  The voters were victims.  We also know that the drop boxes were magnets for fraud.  The movie 2000 Mules was all over this and reportedly identified a number of mules in Wisconsin.

How can you keep an election result that you know is contaminated with hundreds of thousands of  illegitimate votes when the winner was given the race by much less?

Below is a manual on Maladministration and its remedies for elections.

Maladministration and Its Remedies KC Sheare by Jim Hoft on Scribd

The post BREAKING: Wisconsin Candidates for Office Call for Decertification of 2020 Election Based on Maladministration of Election Due to the Use of Unconstitutional Drop Boxes appeared first on The Gateway Pundit.