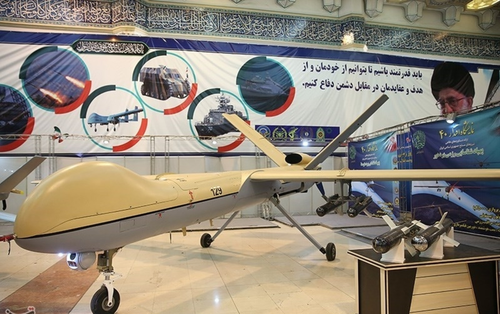 In a truly unexpected and entirely bizarre development, the White House has announced that the US has intelligence showing that the Iranian government is preparing to transfer combat drones to Russia in order to help with the ongoing offensive against Ukraine.

As revealed for the first time in a Monday afternoon White House press briefing previewing President Biden’s upcoming Middle East trip, the transfer doesn’t just involve a symbolic few drones in order for Tehran to merely defiantly thumb its nose at Washington, but allegedly will include “up to several hundred” unmanned aerial vehicles.

White House national security adviser Jake Sullivan told reporters, “Our information indicates that the Iranian government is preparing to provide Russia with up to several hundred UAVs, including weapons-capable UAVs on an expedited timeline.”

This marks the first time that Iran has been accused of helping Russia amid its ongoing assault on Ukraine. The new charge is unusual and curious given Russia already maintains an advanced drone program, and in general its military is considered high-tech and is deemed rival to other major superpowers like the US and China, especially in the area of hypersonic weapons technology. Naturally, this leaves some pundits wondering why Russia would need a whole large fleet of drones from Iran of all countries.

Sullivan told reporters that the drone transfer will even include training Russian troops on how to use them: “Our information further indicates that Iran is preparing to train Russian forces to use these UAVs with initial training sessions slated to begin as soon as early July,” he said.

The US national security adviser did attempt to provide a possible motive or reason why Iran and Russia would make such an unusual deal, per Axios:

Sullivan said it’s proof that Russia’s efforts to overtake Ukraine are “coming at a cost to the sustainment of its own weapons.”

It’s just “one example of how Russia is looking to countries like Iran for capabilities that … have been used before we got the ceasefire in place in Yemen, to attack Saudi Arabia,” he noted.

This appears to hinge on the assessment currently coming out of the West that Russia is losing more of its military hardware and munitions than it was prepared for during these opening four months of the war while seeking to sustain its non-stop bombardment of Ukrainian front lines in the East and South.

While war in #Ukraine triggered #Russia‘s immediate need for #Iran‘s drones, Moscow has been eyeing them for some time. In 2019, director of Iran’s Aviation Industries Organization claimed Russia offered to buy UAVs from Iran: pic.twitter.com/1K4GMNpp3Q

Sullivan is suggesting that Russia fears it will be depleted of the weapons and ammunition stockpile needed to achieve its goals in Ukraine. During the briefing, he added the caveat that “It’s unclear whether Iran has delivered any of these UAVs to Russia already.” It’s also uncertain at this point which UAV types or models the Iranians are allegedly sending.

One possibility is the Sahed 129 or the newer Sahed 136 – the latter which is a ‘suicide drone’. Both were developed and are operated by Iran’s elite Islamic Revolutionary Guard Corps (IRGC), and are considered relatively recent, advanced additions to the Iranian military’s arsenal.