The ‘Bullwhip Effect’ Will Frustrate The Fed

The ‘Bullwhip Effect’ Will Frustrate The Fed

Authored by Lance Roberts via The Epoch Times,

The “Bullwhip Effect” has gotten the media’s attention. However, the market and monetary policy’s causes, effects, and consequences are not well discussed. To understand its impact on the financial ecosystem, we need a definition of what this effect is.

The bullwhip effect is a phenomenon in the distribution channel where demand forecasts create yield supply chain inefficiencies. The “bullwhip effect” refers to the increases in swings of inventory building or reduction in response to shifts in consumer demand as one moves further up the supply chain.

Historically, businesses have a propensity to overestimate the strength or weakness of the consumer. When consumption is strong, businesses believe it is an indefinite state and vice versa. Therefore, small changes to the demand side of the equation tend to lead to significant changes on the supply side.

There is research that indicates that fluctuations in demand of 5 percent are interpreted by supply chain participants as potentially as much as a 40 percent change in demand. Much like cracking a whip, a small flick of the wrist, a change in demand, can cause a large motion at the end of the whip—manufacturers’ responses.

This past year, retailers over-estimated economic demand, leading them to broadly over-order from their suppliers and wholesalers. Those suppliers and wholesalers, in turn, over-ordered from their own suppliers. Such led to a mismatch between consumer demand and inventories. The bloated inventory levels at Walmart (WMT), Target (TGT), Gaps (GPS), and other retailers are recent examples of this “bullwhip effect.”

The problem is seen in the massive surge in retailers’ inventory to sales ratio. 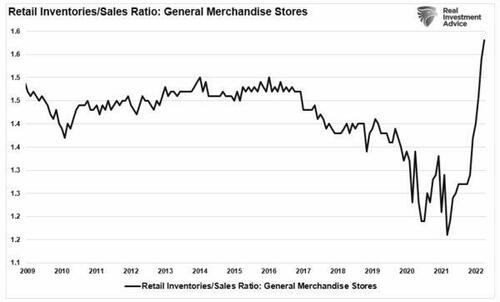 Those inventories must now get heavily discounted, liquidated, or disposed of in the months ahead.

What Caused The ‘Bullwhip Effect?’

In March 2021, we wrote an article entitled “Sugar Rush,” which discussed why the economy would run hot and then crash. Of course, that article followed the passage of a $1.4 Trillion stimulus package by the Biden administration, sending the third round of checks to households. As shown, the flood of liquidity preceded both the economic resurgence and, not surprisingly, inflation. 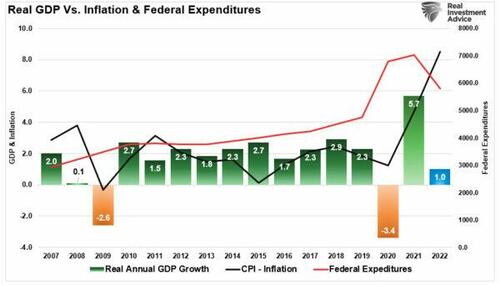 “As the stimulus hits consumers, they spend it rather quickly, which leads to a ‘sugar rush’ of economic activity. Such as:”

“We are seeing this currently as manufacturing and inventory metrics surge. However, there is a ‘dark side’ to stimulus-fueled activity.

“The increase in activity leads to an inflationary rise that companies have difficulty passing on to consumers, ultimately reducing profit margins.

“After the stimulus evaporates, consumers struggle with higher costs which further deteriorates their standard of living.”—Sugar Rush

That artificial increase in consumer activity, driven by the massive fiscal stimulus provided directly to households, is showing up in price inflation. Such is the byproduct of too much demand against a backdrop of limited supply due to the pandemic-driven shutdown. 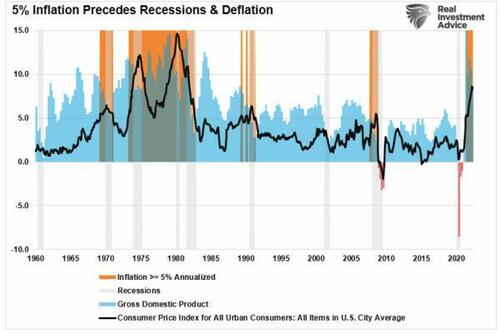 However, since the government could not provide continuous stimulus, now that the liquidity “sugar rush” is over, the economy is reverting to its organic state.

That reversion, and the rebalancing of supply and demand, is “deflationary.” Such will pose a significant problem for the Federal Reserve.

The Federal Reserve is in a race against time. The “bullwhip effect” problem is that the reversion of demand leads to the supply gut, which runs up the supply chain, as noted above. A recession is often the byproduct of the rebalancing of supply and demand.

While Jerome Powell states he is committed to combatting inflationary pressures, inflation will eventually cure itself. The inflation chart above shows that the “cure for high prices is high prices.”

Powell understands that inflation is always transitory. However, he also understands rates cannot be at the “zero bound” when a recession begins. As stated, the Fed is racing to hike interest rates as much as possible before the economy falters. The Fed’s only real tool to combat an economic recession is cutting interest rates to spark economic activity.

Deutsche Bank’s Jim Reid recently noted that the Fed began raising interest rates with inflation significantly higher than seen during prior hiking cycles. Over the past 70 years, the first-rate hike came at the median, when the Consumer Price Index (CPI) reached 2.5 percent. The first increase occurred in March when CPI soared at an 8.5 percent annual clip.‌ The only rate-hiking cycle that resembles the current environment began in August 1980, when the Fed started raising interest rates with inflation running north of 12 percent.

The Fed is way behind the curve in hiking rates, which is why they are aggressively hiking rates now. Their goal is to get to 3.5 percent to provide the room needed to lower rates when a recession begins.

The Fed Has Little Choice

The problem is that monetary policy is already very restrictive. From inflation, surging short and long-term interest rates, and the “bullwhip effect,” economic growth will slow quickly. Such is already showing up in many of the economic reports. Our real-time composite economic index and the 6-month rate of change in the Leading Economic Index confirm the same. 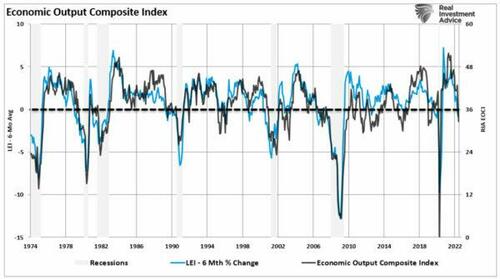 “Policymakers know very well the path of inflation, especially the core rate, over the remainder of this year is impervious to interest rate decisions. Monetary policy works with long lags. ‌But the Fed has constituencies other than monetary economists; they have to calm the inflation fears of the public, the markets, and politicians. That means they have no choice but to sound as tough as possible because part of their job is to rein in inflation expectations.”

However, such is also why the Fed will be back to cutting rates and restarting QE by the end of the year as the recession sets in and concerns of “financial instability” arise. As shown, consumer confidence has fallen sharply this year, leading to recessionary onsets. 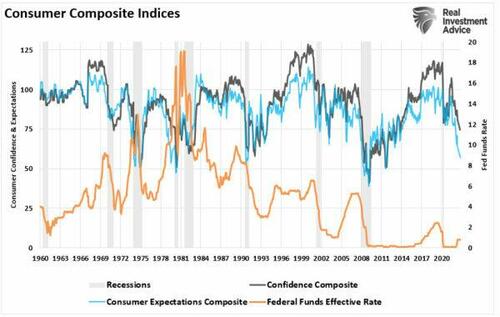 The reality is that the Fed and the markets are subject to the “bullwhip effect” of monetary policy.

The only real question is whether the Fed can lift rates enough to have any real effect with the “deflationary” tidal wave crashes ashore.