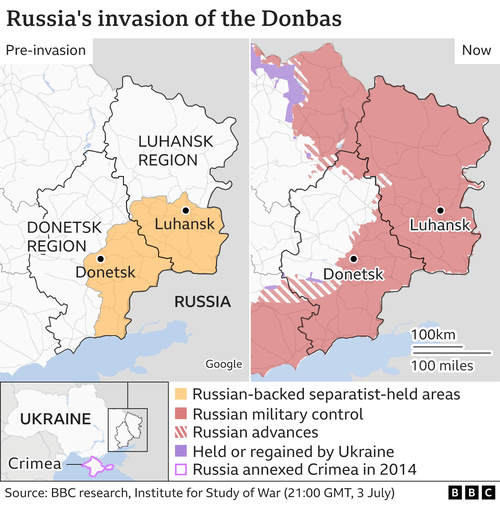 A note in Lisa Daftari’s The Foreign Desk newsletter reads of the latest on the Ukraine war and Washington efforts: “$54 Billion Dollars… and Russia Controls an Area the Size of Mississippi”. In terms of geography and land mass, this represents about one-fifth of Ukraine.

Much of the Donbas region and the south is effectively under Russian military control, also as on Monday President Vladimir Putin signed a decree easing rules for residents of Donbas and some parts of occupied Ukraine, making it easier for the local population to acquire Russian citizenship, according to state RIA.

For those in North America trying to grasp the size of Ukraine.

Additionally the Kharkiv region, which contains Ukraine’s second largest city by the same name, is in the last days coming under intensified Russian artillery bombardment. Bordering Russia to its North, and Russian-controlled Luhansk on its East, a slew of Western media reports are warning Kharkiv oblast is likely the next major region to be annexed by Russia.

Related to this, the UK’s Ministry of Defense has warned in an intelligence briefing that “Control of the E40, which links Donetsk to Kharkiv, is likely to be an important objective for Russia as it attempts to advance through Donetsk Oblast.”

As for the massive amount of US taxpayer money already poured into Ukraine since the conflict, as well as what’s been pledged in total, Fox News has tallied based on the US government’s own figures the following:

The Pentagon on Friday confirmed that the U.S. has provided $8 billion in security assistance since Russia’s invasion in February, but Washington has committed to spending far more.

Earlier this year, Congress committed to spending $54 billion in traditional foreign aid and military assistance in a move to help squash Putin’s offensive.

The funds will largely be divided through traditional channels to support Ukraine but will also provide support to NATO nations and U.S. troops stationed in Europe.

The rest of the over $40 billion is likely to take years to transfer, after President Biden recently vowed to support Ukraine “as long as it takes” – and following the latest $400 million weapons package pledged.

Fox observes that already US foreign and military aid to Ukraine is set to be unprecedented and record-smashing. Washington is now pouring more into the conflict, in which it’s thus far playing an indirect part (or rather as a major external party in a proxy war), than what was required in the direct US occupation of an entire country, namely Afghanistan:

In the roughly four months since Russia invaded Ukraine, the United States spent more money keeping Russia at bay than it did in the first five years of the Afghan conflict.

…According to ForeignAssistance.gov, through 2006 the United States spent $7.4 billion in the first five years of its fight against the Taliban. The peak year for costs was 2011 when the U.S. spent $11.4 billion in its 20-year war that ended with the debacle of the evacuation from Kabul last summer.

The Biden administration, as well as a number of European leaders, have at the same time urged their domestic populations to make personal “sacrifices” on behalf of Ukraine amid rising inflation and energy prices – yet without setting definable goals of what “victory” might look like regarding the West’s efforts in Ukraine.