EU Readying 7th Round Of Anti-Russia Sanctions, Even As Oil Price-Cap Likely Shelved 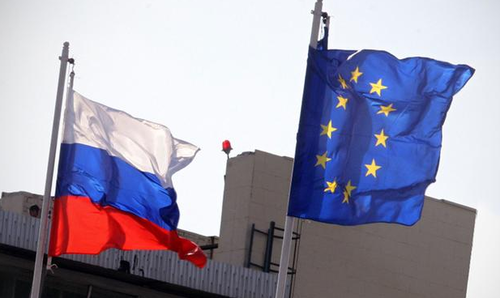 EU Readying 7th Round Of Anti-Russia Sanctions, Even As Oil Price-Cap Likely Shelved

Weeks after the EU imposed its 6th round of sanctions on Russia, it is now readying a seventh new package, according to reporting by Bloomberg on Monday. This comes as Brussels is still said to be in intense discussions on imposing a price cap on Russian oil; however, Bloomberg also notes this controversial strategy remains “unlikely” for the near future.

As for timeline, the EU plans to propose the new sanctions “in the coming weeks,” Bloomberg writes, noting additionally that “Discussions on mechanisms to cap the price of oil are ongoing and unlikely to come in the near future, the people said.” The report notes that “Some member states have been pushing to expand the bloc’s sanctions to hit gas, but there is little appetite among the vast majority of nations to go there.”

Washington has lately sought to convince European allies to force Russian oil to move to market at deeply discounted prices, at a proposed between $40 and $60 per barrel. The idea as pushed at last month’s G-7 summit was met with widespread skepticism given the likelihood that it would backfire and push energy prices higher.

As independent oil analyst Neil Atkinson recently told CNBC’s Squawk Box Europe, “Something like this could only work if you get all of the key producers and crucially all of the key consumers working together and then finding some way of enforcing whatever plan you come up with.”

And he previewed what is now happening – or what is deeply feared as happening – with Nord Stream 1 to Germany: “In any event, the Russians won’t just sit there and do nothing. They can play games with supplies of oil and indeed gas … they can mess with the G-7′s head in some respect so I think this plan is really a non-starter,” Atkinson explained in the interview.

“EU sanctions against Russia turned out to be completely ineffective, they harm the French more than the Russian Federation – Le Pen

“They [the sanctions] have enriched Russia, they sanction the French more than Russia,
The sanctions are the root causes of Inflation’s” pic.twitter.com/GjmxYnNAAk

Currently, the EU’s anti-Russia sanctions imposed in six rounds since February, on top of ones going back to 2014 and the Crimea crisis, include far-reaching punitive measures on 98 entities and 1158 individuals. Below is a partial summary of what they’ve included thus far, according to an official European Parliament explanatory page:

What goods cannot be imported from Russia to the EU?

What are the sanctions on road transport?

The EU has prohibited Russian and Belarusian road transport operators from entering the EU, including for goods in transit.

This sanction aims to restrict Russian industry’s capacity to acquire key goods and to disrupt road trade both to and from Russia. However, EU countries can grant derogations for:

…”In February 2022, the EU refused access to EU airports for Russian carriers of all kinds and banned them from overflying EU airspace. This means that airplanes registered in Russia or elsewhere and leased or rented to a Russian citizen or entity cannot land at any EU airports and cannot fly over EU countries. Private aircraft, e.g. private business jets, are included in the ban.”