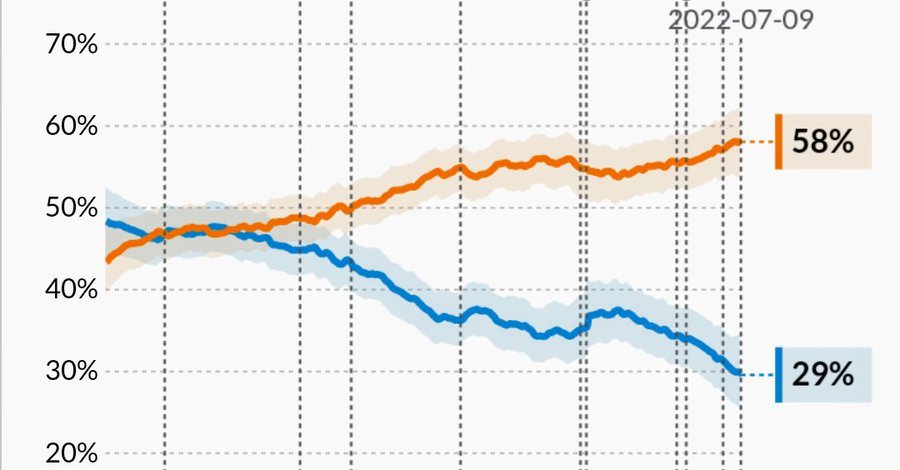 Joe Biden has lost the plot and can’t seem to find it anywhere.

Now comes news Biden has crashed though the 30 percent approval barrier in the daily CIVIQS tracking poll, hitting a new low of just 29 percent approval by registered voters. Biden’s disapproval remains at his record high of 58 percent where it has been for nearly the past two weeks. A gender gap of nine points is keeping Biden afloat, barely. 25 percent of men approve of Biden while 34 percent of women approve Biden.

No other state has Biden above 38 percent approval while a majority have his approval in the teens and twenties. The lowest approving state for Biden is Wyoming at 16 percent. Good luck there, Liz Cheney!

Party ID approval for Biden is a dismal 63 percent among Democrats and one percent among Republicans. Biden’s approval by independents is back to his low among that group at 19 percent.

A Gallup Poll released last week showed only 23 percent of Americans have confidence in the presidency–a fifteen point drop in one year thanks to Biden–and the lowest since Gallup started asking the question nearly 50 years ago.

CIVIQS is the outlier among Biden’a approval numbers, but the trend is not his friend. Two major polls have Biden hitting new lows recently in the mid thirties. Monmouth 36 and Reuters/Ipsos 36.