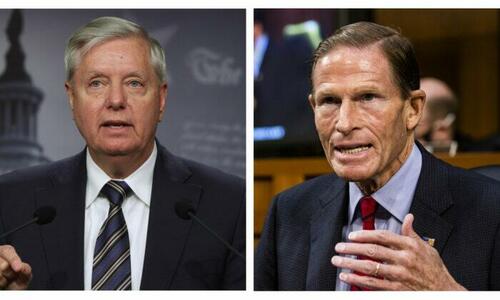 Authored by Naveen Athrappully via The Epoch Times (emphasis ours),

U.S. Sens. Lindsey Graham (R-S.C.) and Richard Blumenthal (D-Conn.) met with Ukrainian President Volodymyr Zelenskyy in the capital city of Kyiv on July 7 to discuss legislation that would assign a terrorism designation to Russia.

The proposed bill seeks to designate Moscow as a “state sponsor of terrorism” and would place Russia alongside countries like North Korea, Syria, and Iran, Graham told Reuters in the joint interview with Blumenthal.

Graham insisted that the proposal could garner near-unanimous support in the U.S. Senate.

Blumenthal pointed to photos of suspected atrocities allegedly committed by Russian forces in the Ukrainian town of Bucha back in March 2022 to support his argument that Russia deserved the “state sponsor of terrorism” designation.

“If that isn’t terrorism, I don’t know what is,” Blumenthal said.

International prosecutors are still investigating the incident with Ukrainian counterparts.

The meeting between the U.S. senators and the Ukrainian president came as Russian President Vladimir Putin warned about more serious military action against the smaller nation.

“Everybody should know that largely speaking, we haven’t even yet started anything in earnest,” Putin said during a meeting with leaders of the Russian parliament. “We are hearing that they want to defeat us on the battlefield. Let them try.”

The Russian president also accused the West of wanting to “fight us until the last Ukrainian,” and said that attempts of the “collective West” to enforce “its version of the global order are doomed to fail.”

Mykhailo Podolyak, adviser to the Head of the Office of President of Ukraine, dismissed these statements, adding that there was no “collective West” plan and that Putin’s mantra of “war to the last Ukrainian” is proof of deliberate genocide, he said in a July 8 tweet.

During the meeting, the Ukrainian president broached the subject of the United States providing more arms to his country.

“We appeal to you so that the Congress supports Ukraine in the matter of supplying modern air defense systems. We must ensure such a level of sky security that our people are not afraid to live in Ukraine,” Zelenskyy said, according to the official website of the Ukrainian president.

In their interview with Reuters, both senators agreed that Ukraine could use U.S.-supplied weapons systems in insurgency campaigns within Russian-occupied territories.

Blumenthal expressed support for further arming Ukraine, including providing air defense systems, Harpoon anti-ship missiles, and HIMARS rocket systems “with longer ranges,” provided Kyiv does not use them to attack any Russian territory.

“Long-range artillery is very, very important. But so is the hand-to-hand insurgency that we are hoping to see in eastern Ukraine, in the territory that’s already been occupied by the Russians,” Blumenthal said.

The Associated Press contributed to this report.