The Façade Of California’s Economy Is About To Crumble

The Façade Of California’s Economy Is About To Crumble

Statistical data and economic projections can be incredibly misleading without taking context into account.   This fact is often exploited by governments around the world, and there is probably no better example than the state of California.

There is an old mantra when it comes to warfare, which is to never buy into your own propaganda.  That is to say, never buy into the lie that you are “winning” if you are actually losing.  The economic and political news coming out of California is consistently dismal these days, and yet state politicians and bureaucrats continuously insist that things have never been better.  Furthermore, they really know how to spin their data.

For example, CA has been losing more people to relocation in the past few years than at any time in the past century.  Try to research this subject matter and you will be buried in an avalanche of pro-Cal fluff pieces from the local media designed to obscure the problem.  State numbers indicate a loss of 117,000 people in 2021 alone (on top of huge losses in 2019 and 2020), but this number does not mention context.  Over 280,000 people LEFT the state in 2021 for a number of reasons, though covid lockdowns and vax mandates seem to be high on the list.  But the government then adds new residents to the mix to diminish the losses. 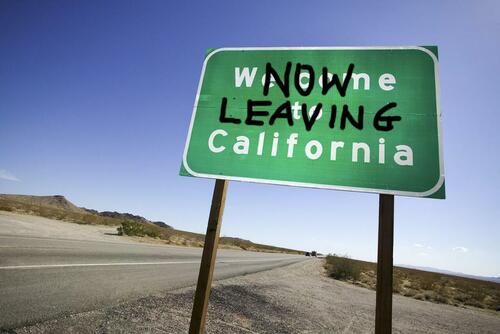 Who are these new people moving into CA?  Mostly illegal immigrants according to border patrol numbers.  Illegal border crossing in California in 2021 hit the highest levels since the height of the Obama era in 2008.  Between 2.3 million and 2.6 million illegals reside in the state today, and that’s one quarter of the estimated 11 million illegals that live in the entire US.  In other words, CA lost 280,000 legal citizens last years and is replacing many of them with people who are not citizens at all, then they claim the population decline is “not that bad.”

This process slowed down slightly during the covid pandemic, but only because of the strict lockdown rules enacted on the southern border.  Now that Joe Biden has lifted those rules and even encouraged illegal immigration through promises of potential citizenship, the floodgates have reopened and California is a major pipeline.

The types of people leaving CA in droves are a mix of middle income families and business owners.  Beyond the lockdown madness of the past couple of years, there is also the issue of  one of the highest tax rates in the US combined with some the most strict permit, employment and property regulations in the country.  California’s tax burden is third highest in the nation under New York and Hawaii, and it is rated one of the most expensive states to start a business.  These fiscal conditions are brutal on small business owners, who employ around 48% of California’s workforce.

The state is rated almost every year as the single worst place in the US to do business by various surveys, and for good reason.

The biggest economic problem in the state right now is perhaps not their propensity for draconian restrictions or taxation, but the issue of property prices and living costs.  In 2021 the median home price in CA rose to $800,000, that’s almost double the US average of $430,000.  The average rental cost is $2500 per month, while the median rent in the US is $1,300.  The cost of living in CA (and many blue states) is simply prohibitive.

Another way the state government tries to obscure their economic failings is by citing GDP stats, which if taken out of context makes the state seem like the most successful in the nation.  An official GDP of $3.4 trillion is quite the distraction, but once we take into account the fact that government spending is calculated as a part of GDP, it’s far less impressive.

California is a massive spender, with over $516 billion in state and local expenditures in 2019 according to the US Census Bureau.  A large portion of this spending is considered part of CA’s GDP.  A business powerhouse?  Not so much.  A government spending and taxation powerhouse?  Absolutely.

California has the fifth largest standing debt of any state in the US, with over $362 billion in total liabilities including unfunded liabilities.  Now, with stagflation hitting hard and the Federal Reserve raising interest rates there is talk of another Great Recession, and voices within CA are starting to get worried.  They know that the state is highly dependent on two primary industries:  Agriculture and government spending.  With drought causing severe water shortages and debt getting more expensive to maintain, a recession at this time could pull the rug out from under the the state economy and unmask the facade.

“Experts” in the state are calling for even MORE government spending to avoid a repeat of the recession crisis of 2008/2009, which means attempting to artificially drive up GDP by borrowing more money from the Federal Government and the Federal Reserve.  In other words, Gavin Newsom and the Democrats in charge are anxious to fight inflation with more inflation.

This is a disaster waiting to happen.  CA is not the only state with these problems, but is one of the largest and most unstable.  The hundreds of thousands of people relocating every year see the writing on the wall, and are smart to get out while they can.  After decades of consistent government mismanagement the golden goose is about to expire.