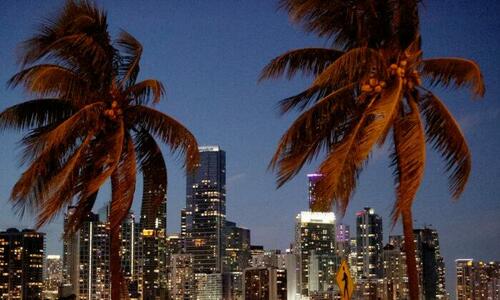 Authored by Nicholas Dolinger via The Epoch Times (emphasis ours),

Throughout the United States, an unmistakable pattern has emerged in economic recovery from the lingering effects of the Covid-19 pandemic: Conservative-leaning states have seen rapid and major economic growth, while the coastal economic powerhouses in the Northeast and West Coast have often lagged behind or stagnated.

A recent analysis by Moody’s Analytics attests to this pattern, using a combination of 13 metrics to chart each state’s progress toward normalcy. A majority of the best-performing states were found to have Republican governments, while 8 out of the 10 worst performers were governed by Democrats.

The impacts on local and state economies are already starting to be felt. Last May, Florida Gov. Ron DeSantis announced that his state had closed out at $20 billion for the most recent fiscal year, a record surplus that reflects the influx of capital into the state.

Another driver of the economic success of the red states has been the combination of astronomical real estate and rent prices in states like California and New York and new work-from-home opportunities, incentivizing workers to move away from the most expensive cities and seek more affordable housing elsewhere, where they can continue to work at jobs based in those cities.

Demographers have predicted an exodus from the coasts to the American interior for years, but the trend has greatly accelerated as a result of the CCP virus pandemic and its downstream consequences. All four of the states that have reported job growth since February 2020 are alike in having maintained relatively relaxed restrictions throughout the pandemic, blunting the impact of the virus on these states’ economies.

Businesses have also begun to migrate toward the American interior and other red-tinted outliers such as Florida. Last December, Tesla relocated its corporate headquarters from Palo Alto, California, to Austin, Texas, following years of conflict with California regulators and rising operational costs. Other companies have also expanded their operations in Florida and other red states.

Florida has seen an explosion of population, drawing over 200,000 new residents from July 2020 to July 2021—second only to Texas for net population growth. Furthermore, hedge-fund company Citadel recently announced its plans to move to Miami, joining a growing community of businesses in the Magic City.

This rapid growth in trendy red state metros is complemented by stagnation and net population loss on the coasts. In 2020, for the first time in over a century, California recorded a net loss in its total number of residents, with over 182,000 fewer Californians at the end of the year than at the beginning. The pattern continued, albeit to a lesser degree, in 2021, which saw a population decline of nearly 118,000 for the Golden State. At the same time, New York City saw a population decline of around 4 percent in just the first year of the pandemic, according to Cornell analysis of U.S. Census data.

#BREAKING: Gov. Ron DeSantis responds to Newsom ad: “Until the last few years, I rarely if ever saw a California license plate in Florida — now you see a lot of them.” pic.twitter.com/50Ok7Sr0MY

For political conservatives, these results are a vindication of Republican policies. With a combination of low corporate and state income taxes, non-intrusive CCP virus policies, and tough-on-crime law enforcement policies, these red-state metros once on the margins of the U.S. economy have become its fastest-growing hubs.

“If the numbers were reversed, and Blue States were consistently outperforming Red States, we’d never hear the end of it,” said Richard Hanania, a political scientist and writer who serves as president of the Center for the Study of Partisanship and Ideology. “This should be seen as strong empirical data useful for adjudicating different realities, but it’s ignored or explained away.”

In many respects, the traditional coastal hubs remain the dominant engines of the U.S. economy. The New York City Metropolitan Area still ranks first in total GDP, followed by the usual suspects: Los Angeles, Chicago, and the San Francisco Bay. However, they have seen slower recovery and a net loss of population since the beginning of the pandemic, and it is clear that they will face new competition after decades of undisputed hegemony, as more workers and businesses seek greener pastures in the conservative-leaning Sun Belt.