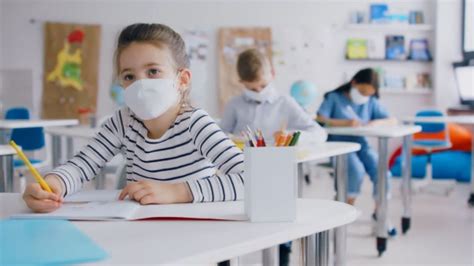 A new Pew Research survey of more than 10,000 adults, revealed the prevailing truth that most Americans doubt that the vaccine or use of masks was or is genuinely effective.

According to the survey, only 48% think “wearing masks around other people indoors” has been effective. An underwhelming 23% give masks a “somewhat effective” grade. But surprisingly, 28% said that masks are “not too” or “not at all effective.”

(E) read this article from the Pew Research Center on how divided our nation was and still is today. 31% of the Democrats were complaining that there are people not wearing masks while 27% of the Republican didn’t believe mask were necessaryhttps://t.co/lroKkRDXgr

Given the mass of breakthrough infections and despite a push for another booster, just 55% of Americans say vaccines have been effective in limiting Covid spread.

Americans have serious concerns about the effect of the pandemic and public health interventions on schoolchildren. A majority, 62%, said that the educational needs of K-12 students were minimized or absent.

According to many reports, American children have suffered greatly, including “learning loss,” sharp increases in juvenile anxiety, depression, and suicide attempts. Many have said the damage to learning continues with the pointless masking of children because it impairs communication and harms social interactions.

When asked to evaluate “public health officials, such as those at the CDC,” roughly half of those surveyed said they’ve done a good job.

72% of Democrats and liberal-minded independents say public health officials have done an excellent or good job, compared to just 29% of Republicans and conservative voters. The data shows a stark contrast along party lines.

Another contrast between parties relates to the vaccine. 75% of Democrats say vaccines have been extremely or very effective, compared to just 32% of Republicans.

The same is true of masking, with 71% of Democrats giving high marks to masking, compared to just 21% of Republicans.

The survey revealed some other unique data points as well. From April 2020 to the present, the percentage concerned they’ll be hospitalized for Covid has fallen by more than half, from 79% to 34%.

According to the survey, 46% of Americans have either tested positive for Covid-19 or are pretty sure they had it

The data revealed that only 49% of Americans are fully vaccinated and boosted within the last six months.

Showing the divide among party-line sentiments, 56% of vaccinated Republicans have gotten a booster, while 75% of vaccinated Democrats has been boosted.

60% of Republicans are fully vaccinated, compared to 85% of Democrats.

The post New Mainstream Poll Reveals Most American’s Doubt Effectiveness Of Masks And Vaccines During Pandemic appeared first on The Gateway Pundit.