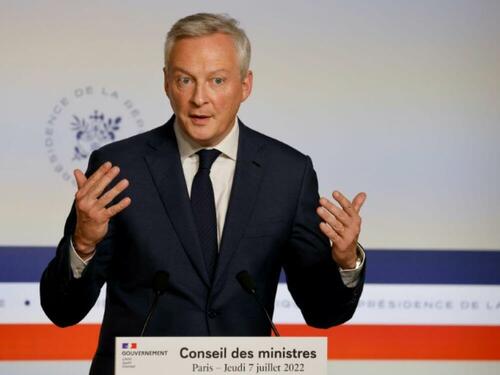 European populations are bracing for a frigid upcoming winter amid an impending avalanche of high energy costs and emerging inflation. On Sunday French Economy and Finance Minister Bruno Le Maire warned that Russia is poised to totally halt gas supplies to Europe and that people must now “prepare”.

“Let’s prepare for a total cut-off of Russian gas; Today that is the most likely option,” Le Maire told an audience at an economic conference in Aix-en-Provence.

He later additionally explained to reporters, “You also have to prepare load-shedding plans, we are doing it. It means looking in a very specific way at each company, each employment area; Which are the companies that should reduce their energy consumption and which are the ones that cannot.”

He said the government is currently compiling a list of these major companies which would be too at risk if their facilities were suddenly deprived of gas supply. They would receive priority in the likely event of a shut-off from Russia. “We have to anticipate and to put ourselves in order of battle as of now,” he emphasized.

As an example, he offered according to Politico:

Le Maire mentioned Saint-Gobain, a major construction materials producer, as an example of companies that should not be deprived of gas supply, even in case of emergency. He pointed to possible damage to production equipment and the risk of environmental consequences.

Germany too is fearing the worst, as its main conduit for Russian natural gas, Nord Stream 1, has long been scheduled to go down for 10-day maintenance starting Monday. But the persisting fear is that Moscow won’t bring it back online, for the purpose of squeezing the German economy further as punishment for its Ukraine stance, forcing Berlin into emergency rationing.

Germany’s population of some 80-million is reliant on Russia for over one-third of total gas supplies, and there’s no immediate alternative. Should Moscow use “routine” maintenance as an excuse to keep supplies halted, some German publications are even predicting social unrest as the squeeze gets put on the working class population in particular.

The prominent English-language Deutsche Welle surveys the alarming situation of many German households, already as rationing of hot water and electricity are taking effect, as follows:

Many renters in Germany are receiving unpleasant letters these days. As energy prices rise dramatically, landlords and property management companies are increasing the monthly flat rate for heating costs. One housing company in Berlin is announcing a 100% increase in heating prices for apartments heated with gas or oil.

Whether this will be enough is not clear. The high energy prices have a delayed impact because the advance payments are not offset against the actual costs incurred until the end of the year.

The GdW, an association that represents 3,000 housing companies, has calculated that each household would have to budget up to €3,800 ($3,870) more for energy in the coming year.

DW concludes of a potential domino effect from a Russian supply cut-off that “the entire economy would be affected. Prognos estimated that, if Russian gas supplies were to fail, Germany’s economic output could drop 12.7% by the end of the year.”

As we discussed previously, just how bad things could get will be revealed starting July 22 – which marks the pre-scheduled date that theoretically marks the end of the maintenance plan to “test mechanical and automated systems” on Nord Stream 1. There could easily be serious “problems” with parts found, potentially allowing Russia to extend the “maintenance shut-off” indefinitely.

Deutsche Bank strategist Jim Reid previously asked whether this could be the most important day of the year: “while we all spend most of our market time thinking about the Fed and a recession, I suspect what happens to Russian gas in H2 is potentially an even bigger story. Of course by July 22nd parts may have be found and the supply might start to normalise. Anyone who tells you they know what is going to happen here is guessing but as minimum it should be a huge focal point for everyone in markets.”