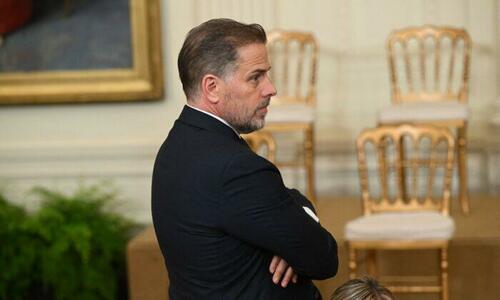 Authored by Eva Fu via The Epoch Times (emphasis ours),

The Biden administration’s move to sell nearly 1 million barrels of oil reserves to China “defies all common sense” and is benefiting U.S. adversaries at the cost of national interests, said Republican lawmakers, with some calling the action “impeachable.”

The Department of Energy in April sold 950,000 barrels of Strategic Petroleum Reserve to Unipec America, the U.S. arm of China’s largest trading company Unipec, which is wholly owned by China Petrochemical Corporation, also known as Sinopec.

Sinopec is a state-run Chinese oil and gas enterprise based in Beijing that has been tied to President Joe Biden’s second son, Hunter Biden, whose foreign business transactions have fueled growing scrutiny.

The sale, though little noticed at the time, is drawing heavy backlash from Republican lawmakers. As the U.S. Strategic Petroleum Reserve (SPR), the world’s largest emergency supply of crude oil, tank to a historic low while Americans nationwide feel the pinch of soaring gas and diesel prices, such a move runs counter to American interests and is putting national security at risk, the officials said.

“The Biden Administration should not be sending our reserves, which we need for our country, to China. It is foolish and defies all common sense,” Sen. Marco Rubio (R-Fla.), who in June introduced a bill to ban oil export to China, told The Epoch Times.

“While you are paying FIVE DOLLARS a gallon at the pump and struggling to pay your electricity bill, Biden just sold one million barrels of our reserved oil to China so his family can make a buck. This is impeachable,” Nehls said on Twitter.

The department described the action as a step to “address the pain Americans are feeling at the pump” and “lower costs for Americans into the future.”

Sinopec is connected to Hunter through BHR Partners, a private equity firm that Hunter helped to set up. The firm invested a combined 10 billion yuan (roughly $1.5 billion) in 2014 in Sinopec.

Hunter was an unpaid board member of BHR until April 2020 and held a 10 percent stake in the company as recently as last May, although it’s unclear if he has divested.

“He has been working to unwind his investment,” White House press secretary Jen Psaki told reporters in February when asked about his business shares.

Besides Unipec, contract awardees also include U.S. oil giants such as ExxonMobil and Chevron, along with three Swiss-based companies. Nine of the companies won bids in a third round of sale of 40 million crude oil barrels in late May.

Over 5 million barrels of oil from the emergency reserve were exported to Europe and Asia in June, with at least one shipment to China, according to a Reuters report.

The national average gas price is down to $4.721 per gallon for Friday, falling 5.8 percent from the $5.016 peak in mid-June, according to AAA. But the price point is still more than 50 percent higher from the same time a year ago.

Amid oil price hikes, Biden has accused oil companies of profiteering and demanded gas stations to “[b]ring down the price you are charging at the pump.”

When asked on July 8 about whether the Biden administration was aware that some of the oil from the SPR could end up going overseas, White House Press Secretary Karine Jean-Pierre said that the Department of Energy “can’t dictate what oil companies do with the oil they purchase or where they ship it to sell.”