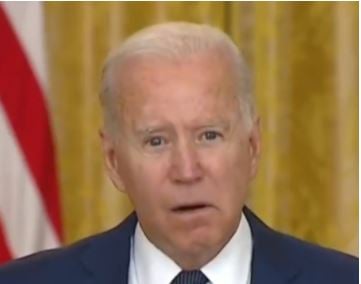 It’s no secret – the man running the United States has pudding for brains.

In yet another display of his declining mental capacity, Joe Biden stumbled to the stage yesterday in order to deliver remarks on a newly signed executive order that enshrines the murder of unborn children federally by way of Obamacare.

While the moment served as a triumph for the anti-American Marxist agenda, ol’ Joe’s senility made the event anything but. As usual, Biden’s remarks turned the event into an embarrassing sh*tshow.

After slamming the supreme court, yet again, as an ‘extremist’ body for turning the abortion question back over to the states, Dementia Joe pulled a Ron Burgundy and began reading his instructions off the teleprompter.

“End of quote. Repeat the line,” a lost and confuse Biden muttered.

Oof. The Biden regime is a laughingstock.

Biden’s boneheaded ‘senior moment’ caused quite a workload for his handlers within his administration, who scrambled to conduct damage control after his remarks. In one of the most shameless examples of an outright lie by the Biden regime to date, one of his communications staffers, Emilie Simons, rushed to Twitter and told people to not believe their lying eyes/ ears.

Biden didn’t just say what the world heard him say, Simons claimed. “No, he said ‘let me repeat that line.’”

Simons unbelievable response was immediately ratioed by Twitter users who blasted her outright lie. She didn’t care, though, and retweeted her post a short while later.

While it may be true that Simons is nothing more than a communications staffer, and, therefore, does not have much input or sway within the Biden regime, she was not the only one making this ridiculous claim in order to cover for Biden. Shortly after Simons pushed the baseless lie on Twitter, the White House shamelessly repeated her claim.

Apparently, ‘you didn’t just hear that’ is now the official line of the fraudulent Biden regime.

As DC Examiner’s Jerry Dunleavy points out, the White House is falsifying records in order to squash a Twitter beef. Welcome to Clown World.

This isn’t even the first time Biden has mistakenly read his instructions off of the teleprompter. But, unfortunately for his handlers, he barely functions without heavy direction that is delivered as if he is a two-year-old. From promising him ice cream to printing out basic instructions to keep him from straying off track, or even dressing up as the Easter Bunny to shuffle him around – this man has proven that he should be nowhere near the highest office in the land, let alone the nuclear codes, but here we are.

Talk about restoring dignity to the Oval office? And these libs thought Trump was bad?

The post Biden’s Communication Staff and White House Come up with Bogus Lie in Attempt to Cover Joe’s Embarrassing ‘Senior Moment’ With Teleprompter appeared first on The Gateway Pundit.