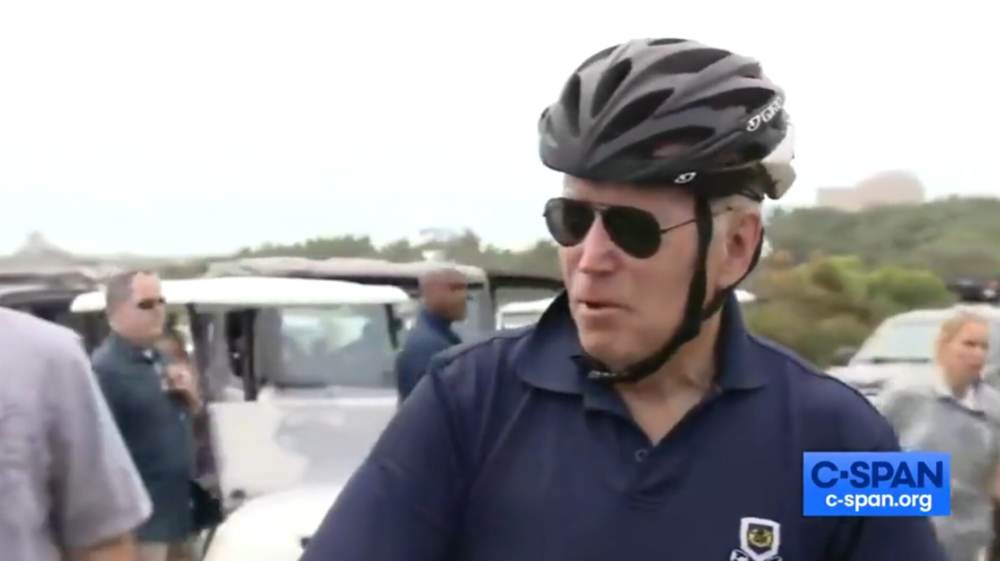 Joe Biden called for more protests by pro-abortion activists in comments made to reporters Sunday during a bike ride at Rehoboth Beach while he is on yet another vacation weekend in Delaware (39). Reporter, “Do you have a, do you have a message Mr. President for women who were protesting outside the White House yesterday?”

Biden, “Yes. Keep protesting. Because, keep making your point. It’s critically important. We can do a lot of things to accommodate the rights of women in the mean time. But fundamentally the only thing that’s gonna change this if we have a national law that reinstates Roe v. Wade.”

Biden also told reporters he is looking at declaring a public health emergency over the ruling by the Supreme Court last month that voided previous rulings declaring abortion a Constitutional right and returned the matter of abortion to the states.

Short version via the RNC:

Complete exchange with reporters via C-SPAN:

When he pulled up to reporters on his bike, Biden told them he had taken off the foot clip on the bike’s pedal that caused him to fall last month. Midway through his brief chat with the reporters Biden realized he had his bike helmet on, saying, “I look like a fool here in this interview​. I put this helmet on because it was a tough interview.”

“I look like a fool here in this interview,” Biden says after realizing he still has his helmet on while he’s talking to reporters pic.twitter.com/QGrOw5Gkp9

Actually the interview was a softball session with an especially chirpy female reporter telling Biden he looked good with the helmet on.

The reporters did not challenge Biden on his encouragement of pro-abortion protests at the homes of Supreme Court Justices, even though Justice Brett Kavanaugh was targeted by a would-be assassin at his home last month and this past week was forced to leave a D.C. restaurant by a back door after protesters gathered outside.

Biden has yet to personally address the attempt on Kavanaugh’s life.