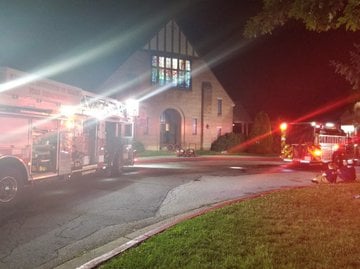 The pro-abortion left’s attacks on churches, pro-life centers and Supreme Court Justices continued this weekend with attacks on churches in the Washington, D.C. suburb of Bethesda, Maryland. An arson fire was set at Saint Jane De Chantel Catholic Church early Sunday. There were no injuries in the overnight fire that damaged pews and caused a reported $50,000 in damages. St. Jane’s had been vandalized the previous night.

Another church in that area was also attacked this weekend. Twenty-four hours before early Saturday the North Bethesda United Methodist Church was also vandalized, though details of that attack are conflicting with reports that there was an arson fire and others saying the church was vandalized. Two fires broke out at separate churches on the same road in Bethesda, Md., over the weekend, according to police and fire officials in Montgomery County. Authorities believe both fires were intentionally set.

The first incident happened at the North Bethesda United Methodist Church in the 10100 block of Old Georgetown Road on Saturday at 1:55 a.m., Montgomery County Police said.

Early Sunday morning, a fire broke out at Saint Jane Frances de Chantal Catholic Church at around 2 a.m., according to Pete Piringer, spokesperson for the Montgomery County Fire and Rescue Service.

Around 2 a.m. the morning of July 10 authorities responded to an alarm in the church. Fire fighters arrived quickly from a nearby station and found a fire burning in the main part of the church. 65 fire fighters responded to the incident and extinguished the fire quickly, according to MCFRS.

The “fire involved several pews in main church area,” Pete Piringer a spokesperson for MCFRS tweeted. No injuries were reported.

This is the second act of vandalism at the church in the past two days, authorities said. No details have been released about the first vandalism incident.

“What’s troubling is that there was some vandalism associated with this fire” Piringer said.

On Saturday, Montgomery County Police officers responded to reports of vandalism at the North Bethesda United Methodist Church located on Old Georgetown Road, the same road as St. Jane’s. The initial investigation showed that the suspect forced entry into the church before vandalizing in various areas, police said.

“Twenty-five hours earlier, Montgomery County police responded to a report of illegal entry and arson at a different church in the 10100 block of Old Georgetown at 1:00 AM Saturday morning, according to crime data. Police and MCFRS have not released any details about that Saturday morning incident to the public as of this writing.”

St. Jane’s is located just inside the Beltway in North Bethesda.

Mass was held in a gym located on the church property Sunday morning.

The post Arson Fire Set at Catholic Church in DC Suburb of Bethesda, Maryland; Same Church and Nearby Methodist Church Attacked Night Before appeared first on The Gateway Pundit.