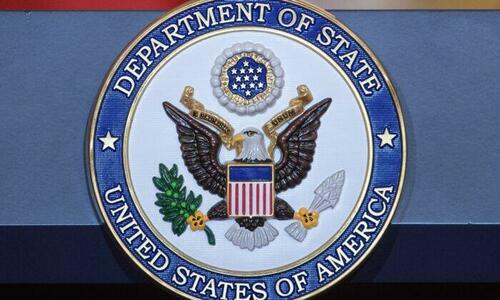 Authored by Nicole Hao via The Epoch Times (emphasis ours),

The U.S. Department of State has recently rolled out an incentive to reward individuals up to $10 million for providing any information on foreign inference in U.S. elections.

The Department of State announced on June 30 that its Rewards for Justice program “seeks information leading to the identification or location of any foreign person or entity who knowingly engaged or is engaging in foreign election interference.”

Furthermore, the reward offer “seeks information leading to the prevention, frustration, or favorable resolution of an act of foreign election interference, including by dismantling, in whole or significant part, an organization engaged in such activity,” according to its website.

China’s Interference in US Elections

The Chinese regime’s interference in the U.S. elections has been publicly acknowledged by its own economist.

In his July 2016 speech on “Sino-U.S. Strategic Philosophy,” Jin Canrong, a professor and associate dean of the School of International Studies at Beijing’s Renmin University of China, explained how the regime interferes in U.S. elections to bring pro-Beijing candidates to power.

“The Chinese government wants to arrange Chinese investments in every single congressional district to control thousands of voters in each district,” Jin said.

He claimed that with the U.S. population standing at about 312 million across 435 congressional districts at the time, there were roughly 750,000 residents living in each district.

“The voting rate in the United States is about 30 percent, which means around 200,000 residents in each congressional district vote for the representative in that district,” Jin said. “Normally, the difference of votes between two candidates is 10,000 or less. If China has thousands of votes on hand, China will be the boss of the candidates.”

Jin said Beijing’s ambition is to control at least the House.

“The best scenario is China can buy the United States and change the U.S. House of Representatives into the second Standing Committee of the National People’s Congress,” he said, referring to the committee that oversees the CCP’s rubber-stamp legislature.

In recent years, Beijing did more than Jin mentioned to interfere in the U.S. elections.

To influence U.S. public opinion against Republicans during the 2018 midterm elections, Chinese state media China Daily ran a four-page advertorial in the Des Moines Register—one of Iowa’s top newspapers—with content about the Sino-U.S. trade war impacting the exporting of soybeans to China. Iowa was a swing state, with multiple state and federal political offices up for election. Soybeans have been Beijing’s main weapon in the trade dispute.

In 2020, the CCP made clear through its state-run media that it favored a presidency under then-Democratic Party candidate Joe Biden because he would be “smoother” to deal with than Trump.