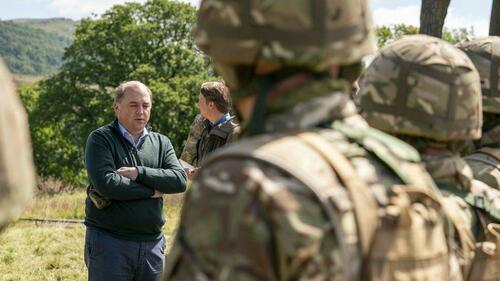 The UK has confirmed the start of a new program to train thousands Ukrainian soldiers on its soil, which is to last at least several weeks for each batch of recruits.

Though Britain was among the earliest to begin large weapons shipments to Kiev within days and weeks after the Feb.24 Russian invasion of the country, the details of the expanse of this new training program escalates the proxy war nature of the conflict to a whole new level – despite Western officials long rejecting the label of proxy war. On Saturday The Guardian details based on defense ministry statements:

Up to 10,000 Ukrainian soldiers will arrive in the UK for specialist military training lasting several weeks. The first cohort met the defence secretary, Ben Wallace, on Thursday, the Ministry of Defence (MoD) confirmed.

#Ukrainian troops training in the UK. Defence Secretary @BWallaceMP visited the training this week, said: “This ambitious new training programme is the next phase in the UK’s support to the Armed Forces of #Ukraine in their fight against Russian aggression https://t.co/6xiUeDQcRO pic.twitter.com/R3wSZY9tcr

The ambitious program is being dubbed the next phase in London’s support to Ukraine, at a tumultuous moment that Boris Johnson is on his way out, having resigned his post as prime minister. It’s well-known that Britain alongside the US had already trained thousands of Ukrainian troops over prior years going back to 2014 and the start of the Donbas conflict.

Defence Secretary Ben Wallace announced, “Using the world-class expertise of the British army we will help Ukraine to rebuild its forces and scale up its resistance as they defend their country’s sovereignty and their right to choose their own future.”

One detail which underscores the huge and unprecedented extent of the program is just how many UK military troops, many of them special forces, it will take to oversee the training of Ukrainians. This after the UK already poured £2.3bn in aid to Ukraine’s defense forces since the start of the war.

“About 1,050 British service personnel are being deployed to run the programme, which will take place at four undisclosed MoD sites across the north-west, south-west and south-east of the UK,” The Guardian discloses.

Further interesting is that the Ukrainians are largely volunteers who lack any prior formal military training, which strongly suggests growing concern and alarm over the rate of Ukrainian troop losses, after Kiev officials admitted starting a month ago that they were losing about 200 personnel a day amid the Russian onslaught.

“The training will give volunteer recruits with little to no military experience the skills to be effective in frontline combat,” The Guardian report details further. “Based on the UK’s basic soldier training, the course covers weapons handling, battlefield first aid, fieldcraft, patrol tactics and the law of armed conflict.”

Despite that Moscow no doubt sees this as a huge provocation and escalation of British involvement in the war, the UK defence ministry is being surprisingly open and brazen about the training, even inviting news crews to film some of it at a secretive location:

This first batch of Ukrainian fighters reportedly arrived in the UK days ago, at a moment Ukraine’s forces seem to be on a slow retreat in the Donbas – and now that Luhansk province is under complete Russian control – with front lines getting constantly pounded by Russia’s superior artillery.

US and UK officials have of late provocatively called for an “insurgency” to rise up in Russian-occupied portions of Ukraine, particularly in the east. For example, just last Thursday, US Senators Richard Blumenthal (D-CT) and Sen. Lindsey Graham (R-SC) visited the Ukrainian capital and met with President Zelensky. Blumenthal announced that he hopes to see a “hand-to-hand insurgency” in territory Russia has captured.

By all means go. I will pay for your tickets.https://t.co/LlW1HmM7pa

“Long-range artillery is very, very important. But so is the hand-to-hand insurgency that we are hoping to see in eastern Ukraine, in the territory that’s already been occupied by the Russians,” Blumenthal said. In light of the new UK MoD disclosures about the size of its Ukraine training program, one central question remains: Is this new large-scale training program hosted in Britain preparing to fuel just such an insurgency scenario? Given the “volunteer fighter” nature of the program, it appears so.

Currently, the US is hosting a much smaller program focused on additional training for Ukrainian officers: “The US has also been providing training to the Ukrainian military, with senior officers studying at Fort Leavenworth in Kansas,” The Guardian report notes. Most Pentagon training efforts have thus far been focused in Poland or other neighboring NATO nations. However, it’s possible and even likely that US intelligence agencies such as the CIA could be running larger clandestine programs on US soil or in Europe.