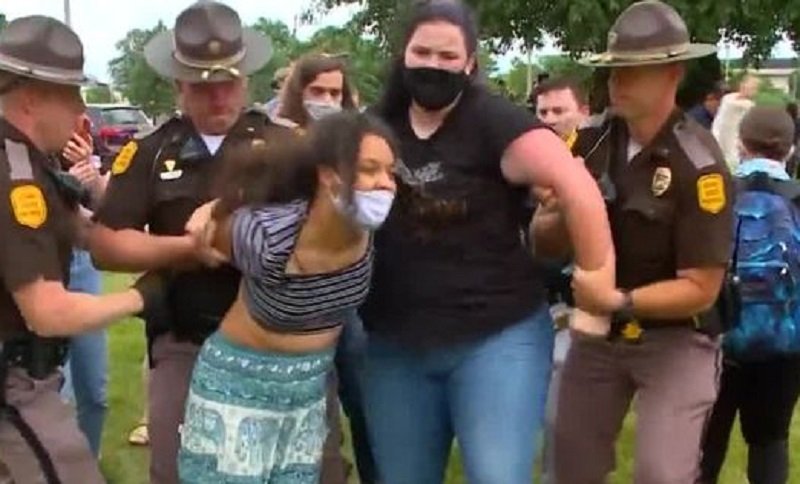 Two Iowa police officers have filed a lawsuit against Black Lives Matter protesters who allegedly assaulted them in Des Moines after the death of George Floyd in Minneapolis, Minnesota.

The officers, Peter Wilson and Jeffrey George, are suing six people who participated in the 2020 protests.

The protesters were all arrested during a protest that took place on July 1, 2020. Five of them have since pleaded guilty to assaulting a police officer and/or interfering with official acts.

One of the protesters named in the lawsuit, Indira Sheumaker, was subsequently elected to the Des Moines City Council. In 2021, she pleaded guilty to a misdemeanor count of assault on a police officer. She was sentenced to two years’ probation.

Local news station KIMT reports that the officers will have an uphill battle to win the case. They reported that “Iowa is among several states that have adopted what’s known as the ‘fireman’s rule,’ which holds that firefighting and policing are inherently dangerous jobs and generally bars emergency responders from suing or collecting damages for injuries that occur in the course of their duties. The rule typically includes some exceptions — such as gross negligence of a property owner or if injury was caused by willful, wanton or intentional action.”

One person named in the suit, Brad Penna of Des Moines, said he thinks it’s intended to “intimidate, function as a scare tactic, and to retaliate” against protesters who fought back against what they saw as unjust police aggression.

Penna was originally charged by police with assault on an officer, but that was dropped when he pleaded guilty to interference of officials acts and paid a $250 fine. Penna was among five protesters who later successfully sued the state after the Iowa State Patrol banned them from State Capitol grounds.

In the lawsuit, the officers describe the actions of the six plaintiffs as “nothing short of domestic terrorism.”

The officers are seeking an unspecified amount for actual and punitive damages.