Trust In Mainstream Media Collapses – Even Dems Don’t Trust Them 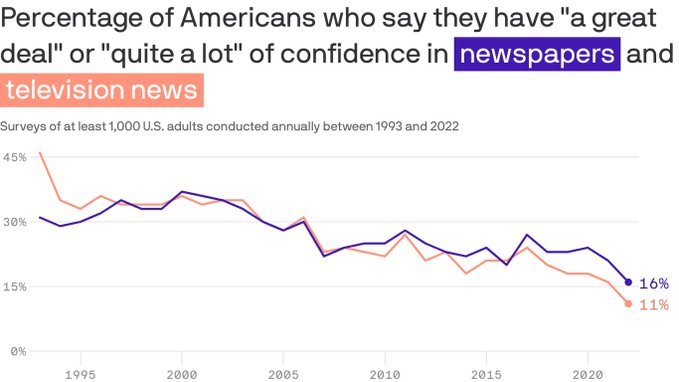 The mainstream media’s credibility is tanking.

A new Gallup poll found that trust in the mainstream media fell in 2022.

Only Congress has a lower approval – even a majority of Democrats don’t trust the media.

Why it matters: The erosion of trust in media is one of the most significant signs of deepening polarization in America.

– Political party affiliation has become the primary driver of opinions about the media’s trustworthiness, as Gallup has noted.

– A 2021 poll from Pew Research Center found that Republicans are far less likely to trust media sources that are considered “mainstream.”

Details: Television news is today considered the second-least trusted institution in the country, following Congress, according to the poll.

Trust in media has been declining for years.

The mainstream media’s lies have come back to bite them.

The post Trust In Mainstream Media Collapses – Even Dems Don’t Trust Them appeared first on The Gateway Pundit.