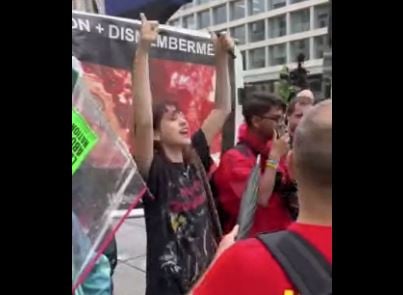 Democrat Party faithful held a march and rally in Washington DC on Saturday in support of unrestricted abortions at any stage of a pregnancy.

The left is furious that the US Supreme Court nullified Roe v Wade and now states get the right to decide their laws on the gruesome procedure adored by the left.

This protest was part of their Summer of Rage activities in Washington DC.

The rage and panic on her face say it all. Satan is very angry with the ruling for Life.

More photos from the Day of Leftist rage.

If you came out to rage at the White House, thank you. If you joined a protest somewhere else, we see you. If you’re supporting us online, we couldn’t do it without you.

This is the Summer of Rage — and we’re just getting started.

Protesters sit in front of the White House during the #WomensMarch in DC #abortion #WashingtonDC pic.twitter.com/rIGdEcEJkd

The Supreme Court is ILLEGITIMATE!
Abortion bans are ILLEGITIMATE!
Forced Motherhood is ILLEGITIMATE!#RiseUp4AbortionRights w us until our demand is met- WE DEMAND THE FEDERAL GOVERNMENT RESTORE LEGAL ABORTION NATIONWIDE NOW!#Green4Abortion
#WEWONTGOBACK pic.twitter.com/9WnaBpyU8Z