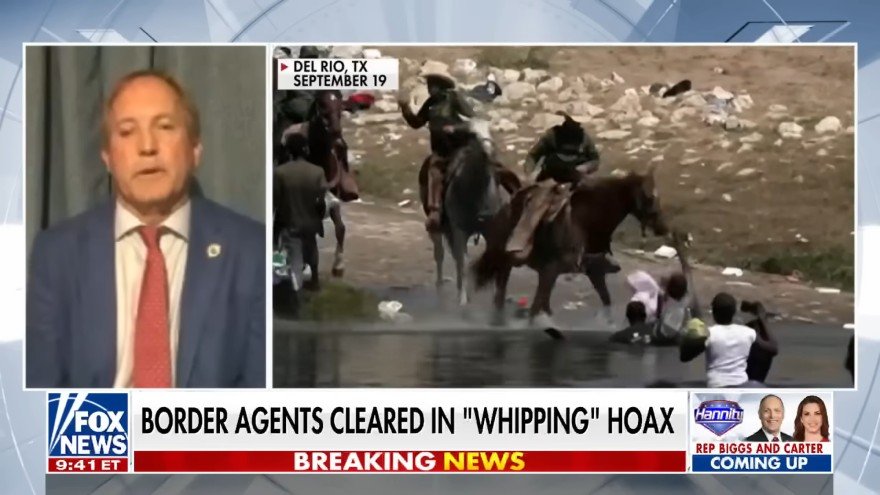 The Texas Attorney General, Ken Paxton, is calling for prominent Democrats, including Joe Boden, to apologize to four border patrol agents after falsely accusing them of whipping migrants at the Southern Border.

In September 2021, four border patrol agents in Texas were falsely accused of whipping a group of Haitian migrants at the southern border. The story made national headlines and became a talking point of the White House.

Images of the incident sparked a humanitarian outcry and a strong response from Biden, who called for the officers to “pay” for their treatment of Haitians.

Border Agents cleared of “whipping” but may be disciplined anyways because of “offensive language.” Only in Biden’s Fascist AmeriKKKA. WTF?

A 500-page report released Friday by the Customs and Border Protection found the whipping allegations that the White House perpetuated were completely false.

Paxton took a moment to call out the lies, the media spin, and the White House agenda to perpetuate the lies.

During a Friday appearance on Fox News’s “Hannity,” Paxton said: “There’s no doubt this was political. And it’s really unfortunate for these border agents who’ve given their lives to securing our border and defending Americans.”

“And here they are being punished, they should be rewarded. They should be taken care of. Instead, their careers may be ruined, and they’ve been humiliated in front of the entire American public,” Paxton told Greg Jarrett, who was standing in for Sean Hannity.

Paxton then said, “And I just think it’s really wrong. I would expect instead that Joe Biden and some of these political leaders should come out and actually apologize to these guys for what they’ve been through.”

Paxton wasn’t the only person calling for an apology from Biden. On Facebook, House Minority leader Kevin McCarthy called for Democrats to apologize.

McCarthy said in a statement: “Our brave Border Patrol agents work to secure our border every day despite the fact that President Biden makes their mission more difficult and more dangerous because of his unconscionable support for a wide-open southern border.”

He continued, saying, “Their reputation was smeared by President Biden, Vice President Harris, and their allies in the media – and they should all apologize to these Border Patrol agents.”

“These agents were cleared of criminal wrongdoing months ago, but instead of admitting they were wrong, the Biden administration is doubling down on baselessly attacking these agents to perpetuate their open-border agenda,” McCarthy continued.

“Rather than disparage the men and women tasked with protecting our border, President Biden should give them the tools they need and deserve to secure our southern border once and for all.”

NEW: Per multiple federal sources, CBP’s proposals for discipline for the horseback BP agents falsely accused of “whipping” Haitian migrants in Del Rio include unpaid suspensions of up to 14 days for administrative violations including “unsafe conduct” & “poor judgment”. @FoxNews

As of now, there has been no statement of apology or correction from the White House. The official report noted that the agents used “offensive language” and said the agent may still be punished, a move only possible under Biden’s fascist leadership.