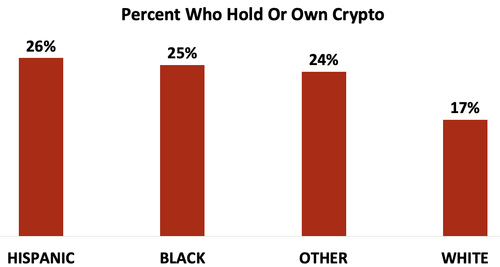 The average black or Hispanic person is more likely to have taken a hit in this year’s cryptocurrency sell-off, as a substantially higher percentage of those two subsets of American society have purchased the digital assets, according to a report from business intelligence firm Morning Consult.

The total market value of cryptocurrencies has nosedived from nearly $3 trillion in late 2021 to less than $1 trillion today.

A June Morning Consult survey of 4,400 adults found one in four Hispanics and blacks own crypto, compared to just 17% of whites.

Similarly, an April survey by Charles Schwab and Ariel Investments found that, among those under 40, about 38% of blacks own digital currencies, compared to 29% of whites. That survey also found blacks are more likely to see the stock market as risky and unfair.

Morning Consult analyst Charlotte Principato told CNBC that Hispanic enthusiasm for crypto is in part driven by its popularity in Latin America and its use by immigrants as a means of sending money to family in their home countries.

Schwab and Ariel said the high interest in crypto among blacks springs from the influence of social media and the general popularity of risky investments among black people.

Principato put it another way: “Black consumers in particular see crypto as an opportunity to build wealth outside of a traditional system that has not served them well historically,” she told Bloomberg.

Though cryptocurrencies are often touted as stores of value, 63% of all crypto owners in the Morning Consult survey selected “I want to make money” as a major reason for their purchase. (In another interesting finding, consumer confidence is 16% higher among crypto owners than the general public.)

Jefferson Noel, a black American crypto owner who took a friend’s advice and poured $20,000 of his savings into a bundle of crypto that includes the once-purely-satirical Dogecoin, tells the Financial Times:

“We do not want to be left behind again. As far as I can tell, the black community sees crypto as a way to even the playing field and get in the game before the gatekeepers prevent others from participating.”

Friends aren’t the only centers of influence driving blacks to speculate in crypto. Black celebrities have pushed it too.

Spike Lee appeared in Coin Cloud crypto ATM commercials, where he derided “old money” adorned exclusively with white faces and proclaimed: “Old money’s not going to pick us up. It pushes us down, exploits, systematically oppresses. But new money is positive. Inclusive. Fluid. Strong. Culturally rich.”

“Old money is not going to pick us up – it pushes us down, exploits, and systematically oppresses. The digital rebellion is here. Old money is OUT, new money is IN.” pic.twitter.com/eD1nCenXBX

Meanwhile, Jay-Z is teaming with former Twitter boss Jack Dorsey to create a “Bitcoin Academy” program that will provide courses on “all things bitcoin” to residents of New York public housing projects where Jay-Z grew up.

Given the demographic differences in crypto ownership, the bear market in crypto threatens to exacerbate existing wealth gaps between races and ethnic groups.

Morning Consult found 42% of crypto holders have a household income below $50,000. That same group is hit hardest by another financial scourge of 2022: surging inflation.

Steep losses in crypto could foster a sense of financial hopelessness, particularly among younger blacks and Hispanics. “The worst thing is if you get started and your first investment doesn’t work out well, it’ll take a long time to get comfortable in the markets again,” Ariel co-CEO John Rogers told Bloomberg.